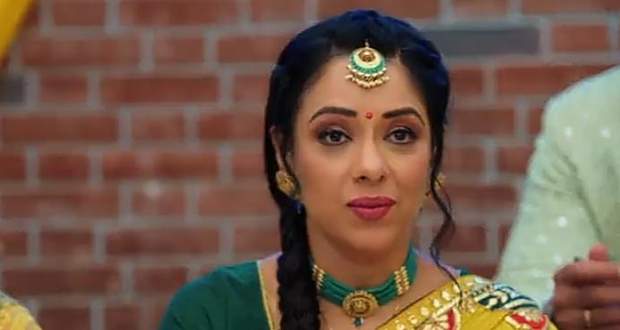 Today's Anupama 3 December 2021 episode starts with Anupama entering the Shah house and praying to God while Kavya sees her from the window and thinks bad about her.

Later, Anupama and Dolly help Leela in getting ready while Vanraj gets a message that the package has been sent to his home.

The Shah family dances as Hasmukh and Leela marry while Kavya sees them and feels like an outsider.

GK asks Anuj if he's jealous of seeing Anupama and Vanraj together while Anuj says that he knows there are cooperating just because of family.

Samar calls everyone for a group selfie while Kavya drags Anupama away from the group and creates drama saying that she can just slap Anupama as she is an outsider and says that she just wants to talk to her.

Kavya takes Anupama to her room and tries to insult her but Anupama keeps giving her a befitted reply saying that she has to keep coming to Shah's house as Kavya isn't taking care of the family members.

Elsewhere, the family keeps talking ill about Kavya and wonders why it's taking so long for them to return.

Anupama tries to advise Kavya to win back Vanraj and the family but Kavya says that she doesn't need anyone.

However, Anupama explains to Kavya that everyone needs family and tells her that she will pray for her.

Meanwhile, Vanraj gets a courier and he looks at his family while taking it.

© Copyright tellybest.com, 2020, 2021. All Rights Reserved. Unauthorized use and/or duplication of any material from tellybest.com without written permission is strictly prohibited.
Cached Saved on: Thursday 20th of January 2022 05:18:49 AM