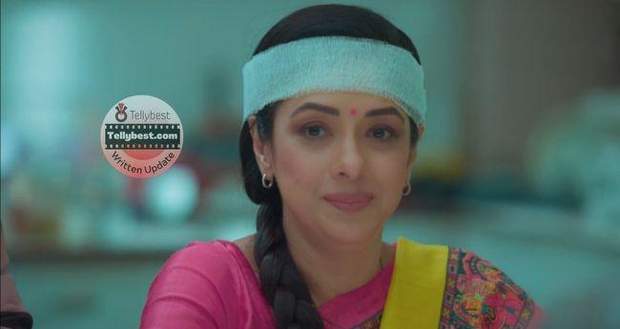 He thinks that the goon has troubled Anupama and Dimple again while they were on their way.

It is true as Anupama shields Dimple from the goon who warns Anupama to take the case back.

He asks her if she is not afraid of dying and if she is, she should not meddle in his way.

He leaves with his other goons by threatening Anupama that this time, he will also kidnap her and kill Dimple & her too.

Anuj gets stuck in traffic and runs to see Anupama but gets faced by the goon who is already in his car.

The goon laughs and shows the gun to Anuj stating he will kill him later.

However, Anuj is not scared and promises the goon his end is near because he has disrespected a woman.

Meanwhile, Anupama gets shaken up and Dimple gets anxious, struggling to stand up.

The pedestrians help Anupama carry Dimple to the Shah House while Vanraj & Samar come to help them.

Samar grasps Dimple's hand firmly while Pakhi watches all this.

Hasmukh asks Vanraj to carry Dimple inside but Leela gets angry at this.

Pakhi tells Leela that Anupama is more worried for other people's daughters than her own and Leela fears that Pakhi's jealousy might turn into hate.

Anuj also arrives there and consoles Anupama who hugs him.

Meanwhile, Vanraj goes to see Pakhi who tells him she's scared since she is all alone & the goon might attack her.

Pakhi tells Anupama she should not be worried about her when she has Dimple.

Leela states that Anupama invited this problem deliberately while Vanraj sincerely appeals to Anupama that she's going too far now.

He bows down in front of Dimpy while telling Anupama that the goons might throw acid in the future or kill someone with a knife or a goon.

He then asks Anupama to publicly declare that she's not a part of the Shah Family if she goes ahead with the case and is not welcome anymore along with Anuj and Dimple.