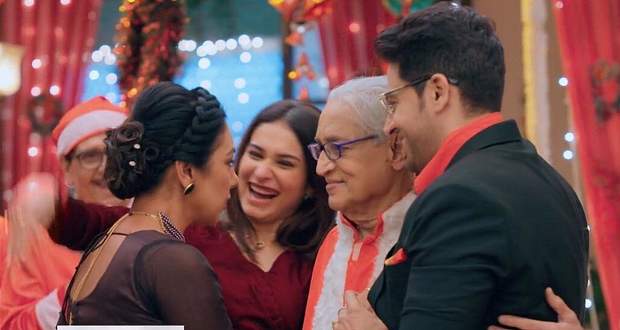 Today's Anupama 3 January 2022 episode starts with Malvika asking Anupama to teach Anuj to not do anything like that in the future.
Anupama comforts Malvika seeing her crying and asks Anuj and her to reconcile with each other and end their argument.
She explains that even if they are not blood-related siblings, their bond of love is stronger than real siblings who often turn into enemies for money and property.
Anuj and Malvika nag and proceed to hug each other, Anupama and the other family members clap for them.
Jignesh also joins their hug and Anuj on seeing Anupama standing, pulls her into the family hug, Hasmukh whispers “ the Kapadias” on seeing the four together.
Later, Anupama asks Anuj whether he will take Malvika back with him to his house, Anuj convinces Anupama to talk about it to Malvika and convince her.
But they find Malvika sleeping and decide to take her with them the next day leaving from there for their home.
After some time, Kavya sees Vanraj asking Kinjal to put the blanket on Malvika instead of doing it himself and gets happy.
Vanraj sees the burnt property papers and stares at them with an odd expression.
On the other hand, Anuj and Anupama walk together home at dawn and share quality time.
Anuj tells her how he has hidden so many things about himself from her, Anupama replies that it takes time to understand a good person.
At the same time, Kinjal and Toshu share some lovely moments, but Toshu highlights the fact that all the property belongs to Malvika now making her the most powerful.
Kinjal doesn’t like his words and hopes that Vanraj isn’t thinking like him about this matter.

Upcoming Anupama episode updates: Vanraj asks Malvika about her ditching the ownership of the Kapadia empire, Malvika asks him if he is trying to manipulate her. Anupama tells Anuj that he will always be the same to her regardless of property.

© Copyright tellybest.com, 2020, 2021. All Rights Reserved. Unauthorized use and/or duplication of any material from tellybest.com without written permission is strictly prohibited.
Cached Saved on: Wednesday 19th of January 2022 12:28:24 PM