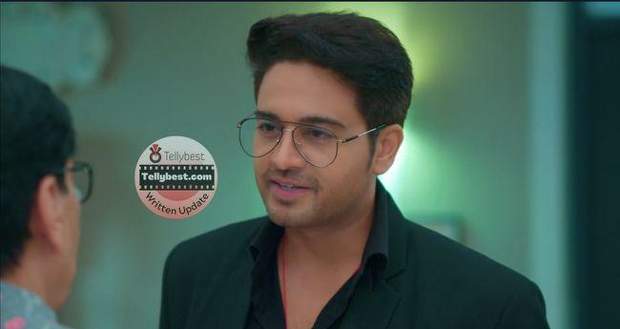 Today's Anupama 3rd January 2023 episode starts with Anuj saying Leela to stop blaming him which angers Vanraj and he asks Anuj to shut up.

Anuj asks Vanraj why he should remain silent when Leela is constantly blaming him for disrespecting her and Hasmukh.

Anupama stands in Anuj’s support as he asks everyone how is it his fault that Hasmukh has not come home yet.

Leela shifts the blame on Anupama now and says that Anupama is the one who filled Anuj’s ears against her.

Anupama asks Leela when she heard her saying something like that to which Leela replies that Anupama and Anuj meant that only.

Anupama asks Leela why she and Anuj would run to their house at midnight for Pari if they did not care about them.

Trying to make Leela and the entire Shah family understand that Anuj has done more than enough for that family without having any direct relation, Anupama says that they should thank her husband a hundred times.

Leela says that she should not have agreed to come there with Anupama as the Kapadias have different mindsets of the riches.

Vanraj tells Leela that the mistake is hers as she took help from outsiders instead of calling Kinjal or him.

Saying that Anupama is supposed to take care of Pari as her grandmother, Vanraj asks her why she and her husband are acting like they did some favor to them.

Anupama denies the allegation while Vanraj raises his voice but gets stopped by Anuj as he will not allow anyone to shout at his wife while standing in his house.

Vanraj says that Anupama and Anuj have humiliated his parents and he will never forget that.

Turning to Samar and Toshu, Vanraj asks them why they stood like statues while these things were happening and did not say anything.

Vanraj asks them why they came to that house along with Pakhi as any stranger would have a problem taking care of so many people.

Kinjal says that she could not come that soon even if she tried to and Vanraj asks her why she needs to leave Pari at such an early age.

Anupama asks Vanraj to talk directly to her instead of targeting the children.

Leela says that Anupama and Anuj are not confessing their mistakes, it is their fault for insulting her and Hasmukh which is why he is missing.

As Samar tries to say something, Leela drags in Dimple and says that girls like her are not to be associated with.

Anupama asks Leela to stop saying anything further while Anuj’s patience runs out and he declares that now he will say.

Anuj reminds everyone that because he loves Anupama, he has always been there to solve the issues of her family.

As Vanraj questions Anuj’s help, Anuj reminds him that it was he who saved their house from being sold to Rakhi which makes Vanraj silent.

Anuj reminds everyone that he is Anupama’s husband but not Anupama and will not silently listen to their taunts.

Making it clear that he does not care about the people who do not care for him, Anuj says that from now on, he has only Anupama and Anu in his family.

Vanraj agrees that Anuj’s words are not wrong and asks him to continue his point of view.

Anuj says that he has never tried to become the father of Pakhi, Toshu, and Samar and became their buddy instead as he never wanted to come between Vanraj and his children.

As Vanraj agrees, Anuj asks Leela to swear on Vanraj and say that she considers Anu as her granddaughter.

Leela stays silent while Anuj laughs and says that Leela has a concept of what is hers and others in her.

Anuj says that he considers Anu and Pari equal but Leela and some others do not and that shows how much they care for him and his family.