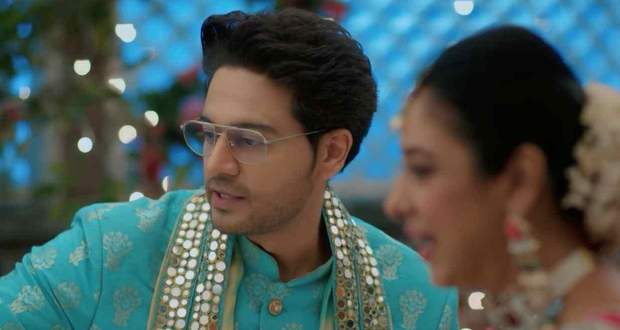 Today's Anupama 3rd May 2022 episode starts with the family members surprising Anupama by appearing in her room as she entered.

On Anupama’s asking, Samar announces that they are going to sleep in that room for the night as it is the atmosphere of marriage.

Kavya appears and asks to join, making everyone feel a bit quirky, but everything goes normal as they resume their fun by playing games.

Surprising Anupama, Kanta comes and tells her that she is also going to stay there for the night and wants to talk to her.

The children play pass-the-cushion while Kanta tells Anupama that her life is going to be more difficult from now on.

Anupama had responsibilities towards only one family in the past, but now she will have to get divided between two families.

Kanta asks Anupama to always put Anuj as her first priority as he does and never let him feel that he is a second choice for her.

Later, Anupama spots the cake in the living room and tries to get off her ring so that nothing messes it up.

However, the ring flies off from her finger and lands on Vanraj’s hand who taunts her about not being able to handle her marriage just like the ring.

Vanraj tries to manipulate Anupama by telling her that she will never be able to give Anuj time amid the family matter and her children.

Hearing Vanraj, Anupama gets nervous for a moment but quickly calms herself.

The next day, Anuj thinks of going on a date with Anupama when Anupama calls and asks him to take her somewhere outside.

Jumping with excitement, Anuj declares that he is coming to take Anupama for their date together.

Vanraj hears Anupama’s conversation and tries to make her feel inferior by reminding her about their going outs in the past but Anupama shushes him up.

Anupama tells Vanraj that she has already divorced him because she did not exist in their past relationship of marriage.

© Copyright tellybest.com, 2020, 2021. All Rights Reserved. Unauthorized use and/or duplication of any material from tellybest.com without written permission is strictly prohibited.
Cached Saved on: Friday 30th of September 2022 07:23:55 PMCached Disp on: Saturday 1st of October 2022 01:43:11 AM