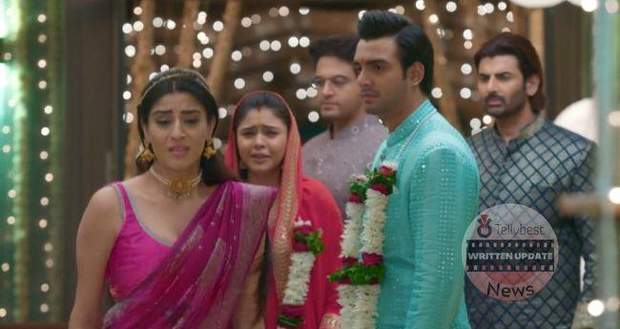 Today's Anupama 3rd November 2022 episode starts with Pakhi asking Anuj why Anupama being her mother doesn't want to understand her.

Anuj shouts at Pakhi asking why should the mother always has to understand the child's mistakes.

He further angrily retorts that Anupama is a human with a beating heart and not a stone.

Anuj then sends Pakhi-Adhik to their room to rest where Pakhi and Adhik perform their version of griha pravesh.

Adhik then feeds Pakhi dark chocolate and embraces her marking the beginning of a new chapter in their lives.

Meanwhile, Anuj walks in on Anupama who is crying inside the tent reminiscing about the childhood days of Pakhi, and hugs her.

On the other hand at the Shahs, Samar promises Vanraj that he will never run away to get married.

Vanraj asks Samar to leave him alone for a while.

In the meantime, Pakhi-Adhik discusses how they are going to win their family over.

Adhik promises Pakhi that neither his parents nor Vanraj would stay angry at them forever.

Anupama further says that Pakhi has always been a carefree girl and Pakhi will crumble under the pressure of all the responsibilities and obligations that would come with the marriage.

Anuj tries to comfort Anupama and tells her that Adhik will work at his office while Pakhi will complete her studies.

Ankush tells Barkha to calm down and asks whether she is sad about Adhik's betrayal because it spoils her plan.

Barkha says she knows she will have to eventually accept the marriage as they have no respect here.

Anupama wonders what got into Pakhi after she met Adhik that she could betray her own family for an outsider.

Anupama further tells Anuj desperately that only she knows the anguish of failing relationships.

Anuj consoles her saying not to take Barkha's outburst to her heart, as he feels Pakhi-Adhik will live up to the task.

Anupama asks whether Anuj trusts Adhik and Anuj replies saying everyone has room to change.

Meanwhile, Barkha tells Ankush that after the honeymoon phase is over Adhik's real face will show.

Anuj asks Anupama to consider getting Pakhi-Adhik to get married with proper rituals to correct their mistake.

Anupama tells Anuj that she fully trusts Anuj to make the right decision as right now she can't think straight.