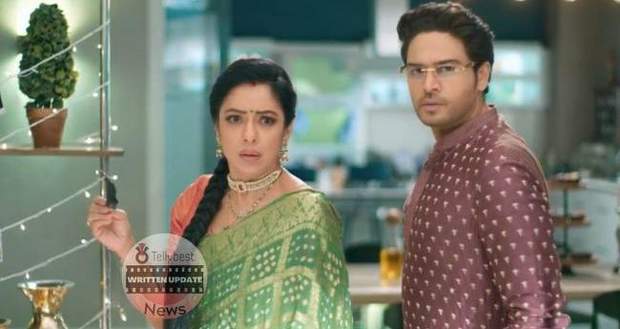 Today's Anupama 3rd October 2022 episode starts with Anupama and Anuj implying that there must be a mistake from their side in communicating things as both of them love Anu dearly.

The officials ask Anupama and Anuj if they lost Anu earlier and tag them as irresponsible parents.

Anupama tries to explain that Anu did not get lost technically but was absent for a bit while playing around the house.

Supporting Anupama’s words, Anuj tells the officials that children are bound to be running here and there and do naughty things but that does not mean that their parents are irresponsible.

The family members also support Anupama and Anuj and tell the officials that they take care of Anu earnestly.

However, the officials inform everyone that it is their duty to investigate things from their side, and to do that, they have to take away Anu from there.

Anupama and Anuj get thunderstruck on hearing that and deny letting go of Anu as both they and Anu cannot bear to live separately for one night.

The officials clearly state that they are there after getting a complaint call from that house that said that Anuj and Anupama are not taking proper care of Anu.

Anu hears the officials saying that they are going to take her away and comes out running to Anupama and Anuj.

Hugging Anupama tightly, Anu says that she does not want to be away from Anupama and Anuj as they are the best parents she could ever wish for.

Anu begins to cry which breaks everyone’s hearts while Toshu scoffs standing at the back that gets noticed by Vanraj.

Everyone in the family joins their hands together and requests the officials to think twice about their decision.

Even Leela vouches on Anupama’s motherhood despite hating her partially.

After several requests and pleadings, the officials decide that Anupama and Anuj are nothing like what was mentioned in the call and conclude that Anu can stay with them happily.

The announcement relieves the anxiety of all the family members and they all gather around Anu, Anuj, and Anupama and congratulate them.

After the officials leave, Anupama’s eyes fall on Toshu and she instantly understands that it was him who called them.

Anuj asks Anupama if she is sure that it was him and steps toward him after she confirms from her side.

Without giving any warnings or lectures, Anuj lands two thrashing slaps on Toshu’s face back-to-back making him stumble in his steps.

After Vanraj pressurizes him, Toshu admits that he was the one who called the officials as he wants to take revenge on Anupama for separating him from his family.

Vanraj tells Toshu that being separated from Kinjal and Pari is his own fault and has nothing to do with Anupama.

Folding his hands, Vanraj apologizes to Anuj once more for Toshu’s mistake while Anuj tells Anupama that they are leaving immediately.

© Copyright tellybest.com, 2022, 2023. All Rights Reserved. Unauthorized use and/or duplication of any material from tellybest.com without written permission is strictly prohibited.
Cached Saved on: Monday 21st of November 2022 05:44:36 AMCached Disp on: Thursday 1st of December 2022 12:07:54 PM