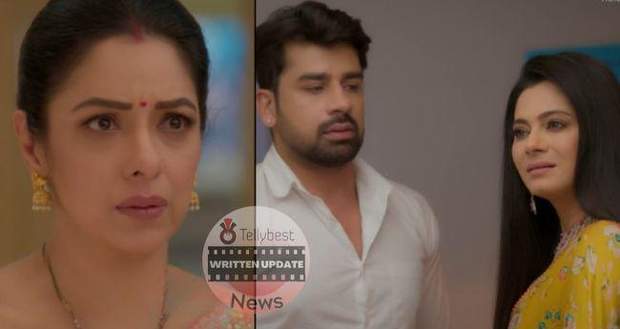 Anupama says that she is worried that Rakhi is hiding something.

Hasmukh says that she should not worry over it now, they’ll handle it when the future comes.

Hasmukh asks her if he can get 2 cream rolls on this special day and Anupama says one for her and one for him, while Hasmukh runs away saying he’ll take two.

Later Anupama calls Anuj and Choti and talks to them, however, before Anuj could say anything else Samar calls Anupama and she has to hang up.

Anuj feels irritated when suddenly Barkha and Ankush come to say that in the absence of Anupama Choti needs a mother even if Anuj does not need help.

Anuj says that Choti is an independent child and they’ll manage.

Later, Barkha and Ankush talk that they should not give up trying and show genuine care for Anuj and Anupama.

In the hospital, Rakhi asks Paritosh how Mumbai was and he says it was good.

She later adds if the company was in Mumbai or Gujrat which suddenly makes Leela intervene.

She says that whatever company it is who cares on a day like that but, Anupama senses something fishy.

Later the nurse says that only one family member can stay since the visiting times are over and Paritosh says that he’ll stay.

However, Rakhi says that he won’t stay since it’s better if a lady stays.

Rakhi announces that she will stay and everyone agrees but Toshu says that he will meet Kinjal and the baby for a while and then go.

In the corridor, Rakhi meets Paritosh and tells him that she knows everything.

Toshu says cluelessly that he doesn’t know what she is talking about.

In fury, Rakhi is about to slap Toshu but stops at the cry of her granddaughter. Toshu asks what did he do such that Rakhi has to slap her son-in-law.

Rakhi tells him that she knows what he has been doing for the past three months in a Rajkot hotel room with a girl.

Rakhi says her sources told her the girl’s name, his room number, and everything.

She insults her for having the same blood as Vanraj and Paritosh feels guilty.

He tries to make her understand that it was just a fling and Rakhi explodes at his words.

Paritosh further tells that Kinjal was pregnant and he had needs, but there was no emotional attachment.

She warns him the last time that if anything like this happens again she is going to ruin him.

During all this Anupama forgets her phone in hospital and comes back.

She is in the corridor talking to a nurse and a bit away from the place where Paritosh and Rakhi conversating.

© Copyright tellybest.com, 2020, 2021. All Rights Reserved. Unauthorized use and/or duplication of any material from tellybest.com without written permission is strictly prohibited.
Cached Saved on: Saturday 1st of October 2022 11:32:35 PM