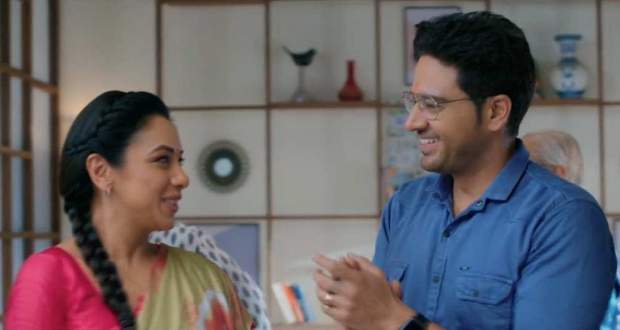 Today's Anupama 4th April 2022 episode starts with Leela welcoming Anupama, Hasmukh, and others after they return from Anuj’s place.

With all the jewelry in front of her, Leela shows Hasmukh their capacity in wealth and asks him to spend every penny on the marriage of Anupama.

Leela leaves after saying her words that the Shah family is not a wealthy one who has unlimited wealth resources to which Anupama agrees.

Anupama requests Hasmukh not to spend his entire savings on marriage as it holds the root of the family economy.

Empathizing with the economic situation of herself and the family, Anupama announces that hers and Anuj’s marriage will be celebrated in a simple manner.

Meanwhile, Anuj asks Devika to arrange the best DJ in the town along with the best venue, dresses, etc. so that Ahmedabad remembers this marriage as a memorable one.

Samar and Kinjal tell Anupama that although it is her second marriage, for Anuj it is the first marriage of his life.

At the same time, Devika tells Anuj that Anupama might want a simple marriage as the whole issue is going on with it.

Hearing these, Anuj and Anupama both fall into deep thought and decide to meet each other on a call.

Meanwhile, Vanraj and Toshu plan to get help from one of Toshu’s friends named Yash and prepare the proposal with utmost detail.

Later, Anupama and Anuj meet up with Anuj agreeing to carry on the marriage in the way Anupama wants it.

Anupama asks Anuj to put forward his wishes and not always give in to her preferences.

Coming to a mutual decision, Anupama and Anuj decide to do everything at its best in a middle-class style so that every event gets managed within economic boundaries.