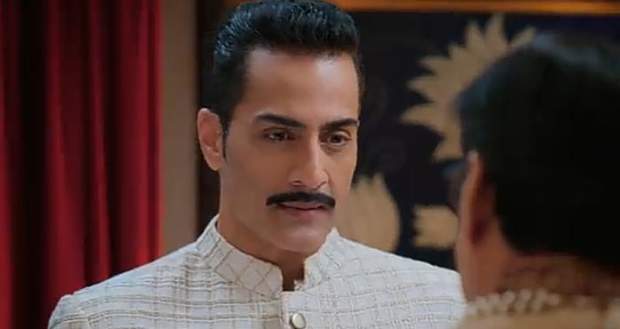 Today's Anupama 4 December 2021 episode starts with Anupama coming back and asking the family members why they are so silent on such a happy occasion.

She plays Baa’s favorite music and tells everyone to dance.

Vanraj asks what she was talking to Kavya about but Anupama doesn’t tell anything to him.

Kavya comes back with papers and stops the music. She goes to Hasmukh and Leela and hands them the papers announcing that she has returned the house back to their names.

Kavya further tells that she doesn’t want the house anymore and apologizes to everyone.

She tells everyone that Anupama has made her realize that she just needs Vanraj’s love and the support of the family.

Kavya asks Vanraj to smile as she had done this to make him happy and asks if he still is angry with her.

Vanraj smiles and all others rest assured.

Later, Anuj tells Anupama that now that her family issue is resolved, she will have more time for her job and herself, Anupama agrees and becomes happy.

Hasmukh and Leela thank the family members for making their marriage so special.

Vanraj announces that as Kavya has returned back the house, he wants to give something to her.

Vanraj calls Kavya at the center and hands her an envelope. Kavya opens it and is shocked to see divorce papers.

Kavya asks Vanraj why he wants to divorce her when she has returned back the house but Vanraj announces that it was his final decision to end his second marriage.

Kavya accuses Anupama of triggering Vanraj against her and starts pushing her in anger.

Anuj warns Kavya to not touch Anupama or else he will lash out at her.

Kavya tears of the divorce papers saying she will not sign them but Vanraj hands her another copy and says he will divorce her for sure.

Upcoming Anupama written episode update: Kavya begs Vanraj to not leave her but he doesn't listen to her.

© Copyright tellybest.com, 2020, 2021. All Rights Reserved. Unauthorized use and/or duplication of any material from tellybest.com without written permission is strictly prohibited.
Cached Saved on: Thursday 20th of January 2022 03:46:06 AM