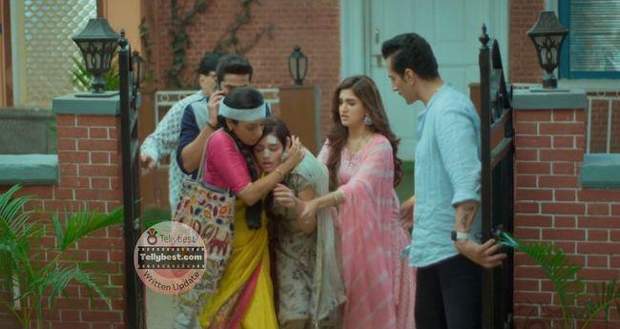 Today's Anupama 4th December 2022 episode starts with Leela telling Anupama that her family will not stand beside her in Dimple’s case as they do not want any danger to lurk in their lives.

Leela says that whatever Anupama is doing is very good and brave but everyone is not like her and cannot stand against evil like a hero.

Hasmukh says that even though everyone is scared, the fear in Anupama and Dimple is different as their belief is much greater than their fear.

Giving the example of Lord Krishna, Hasmukh says that Anupama has the strength as well as bravery to fight evil.

Anupama says that Vanraj and Leela are right at their places but she will not change her decision as she has come so far.

Before leaving the house, Anupama asks Vanraj to take care of Pakhi as she needs to be protected.

Vanraj tells Anupama that from now on Pakhi will live in the Shah house for the period Adhik goes to the office.

Anupama says that it is the right decision to allow Pakhi to live in the house and Pakhi begins to overreact.

Anuj informs everyone that the cab driver got caught due to Anupama’s complaint and has no relation with these molesters.

Meanwhile, Anu makes a drawing about Anupama punishing those molesters with Lord Krishna giving her power.

Anupama, Anuj, and Dimple return home and see that drawing which gives them the motivation to move forward.

Anupama asks Anuj if she is being stupid by fighting such a case and if others are right to step back.

Anuj replies that everyone needs a stupid like her in their lives as they have not forgotten humanity yet.

Anuj and Anupama share a hug and Anuj gives a soft kiss on Anupama’s forehead.

On the other hand, Vanraj brings Pakhi into the Shah house and she begins to say that she will leave if anyone has any problem with her being there.

Leela asks Samar to carry Pakhi’s suitcase and drop her at her house as she does not want her in her house.

Vanraj tells Pakhi that she will live with them as that house belongs to her too.

Pakhi tells Vanraj she is hungry and wants to eat something special like pasta, French toast, etc.

Vanraj asks Kavya to make something for Pakhi to which she replies that Vanraj should cook himself for his beloved daughter.

After Kavya and Kinjal inform her that they have turned Pakhi’s room into an office, Pakhi goes to Vanraj to live with Kavya.

Vanraj warns everyone not to say anything bad to Pakhi while she is staying in their house.

At the same time, Anuj, Ankush, and Barkha leave Anupama and Dimple in a tent lit up from inside like stars.

Anupama pats Dimple after placing her on her lap and sings a melody in which Dimple joins her.

© Copyright tellybest.com, 2022, 2023. All Rights Reserved. Unauthorized use and/or duplication of any material from tellybest.com without written permission is strictly prohibited.
Cached Saved on: Wednesday 25th of January 2023 09:52:32 AMCached Disp on: Wednesday 1st of February 2023 06:05:31 PM