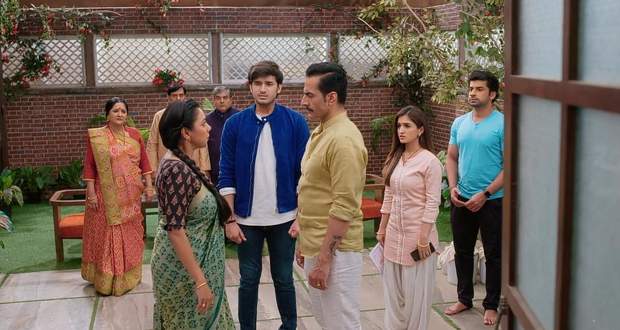 Today's Anupama 4 February 2021 episode starts with Rakhi taunting Vanraj and inciting him against Anupama by saying that she purposefully let Kinjal get his job even after knowing that it was his position earlier.

She further tells him that Anupama will just shed a few tears and will become the victim in front of the court while painting him and Kavya as the villains.

Meanwhile, Anupama talks to the students while she sees Pakhi and goes to her.

She shows care for Pakhi by giving her burger and trying to talk to her but Pakhi ignores her and goes while Anupama thinks that something is bothering her.

Later, Anupama gets scared seeing Vanraj at her home and drops the glass bottles shattering them.

Vanraj starts accusing her and gives her the divorce papers urging her to open them.

However, the papers are in English while Vanraj insults her saying she doesn't know English.

The family berates Vanraj while Vanraj reveals that Anupama has panic attacks while she accepts that she does get Panic attacks.

However, she tells him that she got every panic attack when one of his secret unveiled and that he is the reason she gets panic attacks.

Vanraj says that she humiliated him in his office and his house and now he will teach her how she feels when getting humiliated when Anupama says that she has learnt only that in the last 25 years of their marriage.

She says that she'll glad he did all this fiasco in front of everyone because now Paritosh won't blame her and Leela won't tell her to forgive Vanraj that after she saw what he did.

Anupama says that she is not the same scared Anupama as before while Vanraj tells her that he has also changed that now there will be a war against them.