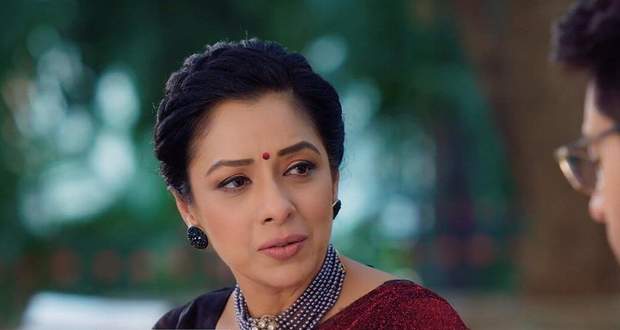 Today's Anupama 4 January 2022 episode starts with Anuj asking Anupama if she felt bad or angry towards him on hearing today’s revelation.

Anupama replies to him that she didn’t feel an ounce of sadness on hearing that day’s matter, instead, her respect for him has increased.

Anuj explains to her how his parents meant the world to him; he got their love more than Malvika in childhood so when they died, it became his responsibility to give their share of love to her.

He further tells Anupama how he felt like a king when his mom used to call him ‘raja beta’, Anupama silently puts a newspaper crown on Anuj’s head.

She tells him that a king should wear a crown always and both have a good laugh.

Meanwhile, Vanraj notices Malvika cleaning the decoration, both sit down for a talk.

Malvika tells Vanraj how Anuj is too good and an idiot at times who decided to give such a huge business to her just like that.

Vanraj tries to convince Malvika that Anuj might be thinking of making her more capable by handing over the business.

Malvika jokingly says that she doesn’t need such a burden on her, Vanraj corrects her that it’s a power that she will have.

Malvika asks Vanraj if he is trying to instigate her.

On the other hand, Anuj tells Anupama that he doesn’t find joy in money but in spending time with her.

At the same time, Vanraj asks Malvika why she left Anuj 10 years ago to which Malvika leaves by making an excuse.

Later, she apologizes for leaving and advises to give a chance to his and Kavya’s relationship and comforts him by hugging which Kavya sees.

In the meantime, Anupama tells Anuj that for her he will always remain Anuj who loved her for 26 years, it doesn’t matter if he is Kapadia or not.