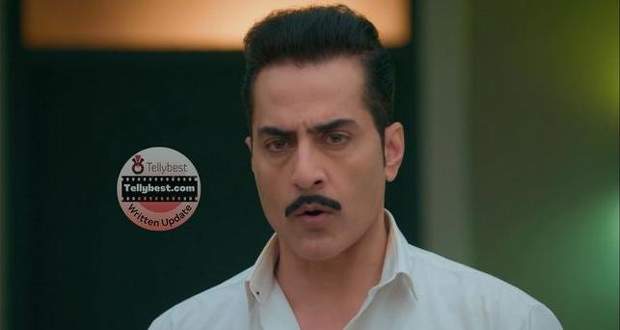 Today's Anupama 4th January 2023 episode starts with Anuj saying that his family could not be happy despite not having any issues among them and asking Leela the reason for that.

As Leela says that she will get blamed for that, Anuj gladly agrees with her and says that despite not having any issues of grief, they are busy fighting with each other.

While the entire city is celebrating the happiness of the arrival of the new year, they are standing there and fighting like grave enemies.

Anuj says that for a long time, he has been trying to help the Shah family with their issues but now they are accusing him only.

Anuj says that he did whatever he could as per the needs of the family but they have never considered him as a part of their “own” family.

Kavya stands up and says that Anuj is saying everything correctly to the last bit as she is also in the same situation as him.

Kavya tells Anuj that the Shah family has not accepted her yet as their family so he should not have any expectations.

Vanraj tries to stop Kavya but she does not listen to him and says that Anuj can never tell anything offensive to Hasmukh based on how much she knows him.

Leela asks Kavya why she is blowing away the respect of her own family to which Kavya replies that she is merely telling the truth.

Kavya tells Leela that like Anupama she does not cater to her manipulations, so she is not good in her eyes and becomes a mere “Maide Ki Katori” (Bowl of flour) to her.

Leela says that she calls Kavya that by love while Kavya replies that she is also saying these because of love.

Kavya tells Vanraj that she has no value to him as his wife as he only believes in Leela’s words and sees nothing more than that.

Moving on, Kavya says that no matter how much she loves the Shah family, they do not show her an ounce of gratitude and respect.

For Leela, no one is important except her own blood, that is, Vanraj, Toshu, and Pakhi.

No matter what mistakes they make, Kavya says that Leela will always support them as she considers them as her “own” family.

Reminding everyone about Toshu’s case, Kavya says how Leela started siding with him after scolding him a bit.

Kavya tells Anuj that the Shah family is absolutely selfish and self-centered and does not care about the people who are not blood-related to them.

Kavya points out that there is a group in this family who always tend to dominate others with which Kinjal strongly agrees.

Kinjal reminds everyone how they casually forgave Toshu for his mistake and emotionally blackmailed her to come back with Pari.

Anuj states that the Shah family only remembers him and Anupama whenever they need them to resolve any issue.

As Anuj says that the Shah family does not know how to be grateful and proceeds to leave to search for Hasmukh, Vanraj spots Hasmukh and takes his name.

Everyone turns around to see Hasmukh standing at the door and rushes to him to check on him.

Hasmukh says that he got lost in the city but is regretting returning there as he never imagined seeing such a scene where his family is fighting with each other like cats and dogs.

Hasmukh asks Anupama what Leela said to Anuj as he was listening to them for some time while standing outside.

Kavya speaks instead of Anupama and tells Hasmukh that Leela accused Anuj of insult her and Hasmukh and that he left him in the middle of the road.

As Leela denies saying that, Hasmukh raises his voice to ask her to keep her mouth shut and not say a word.

Hasmukh says that what Anuj has done for him and his family even cannot be matched by his own son, Vanraj and they blamed him only.

Pointing out how Leela has planted a seed of partition between the two families, Hasmukh says that it is the right thing to go with that.

Hasmukh says that with this new year, people have to change and Anupama has to change the most.