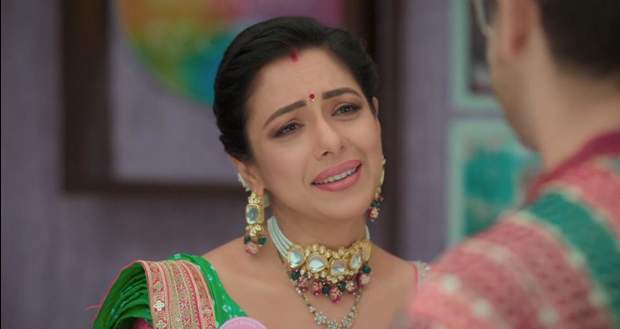 Today's Anupama 4th July 2022 episode starts with Anuj suggesting that Barkha can perform on the song as he is her Devar.

Adhik and Pakhi get close to each other and suddenly Pakhi and Adhik escape the celebration and move out somewhere else.

Anupama gets a hint that something is not right and looks for Pakhi.

On the other hand, Adhik tries to say something important to Pakhi and feels nervous as he comes closer to Pakhi.

Adhik steps back while Pakhi comes closer to Adhik hinting about her consent.

Anupama arrives and looks at Adhik holding hands with Pakhi.

Before Anupama reacts to the situation, Vanraj suddenly arrives and says how dare he come closer to his daughter.

Vanraj's voice echoes in the room which shocks Anupama.

Pakhi and Anupama stop Vanraj from blasting on Adhik while Vanraj stays unbudged and blames everything on Anupama as he warned her earlier that she should keep the two families away from each other.

Vanraj pulls Adhik by his collar and drags him to the main hall.

Adhik stays respectful towards Vanraj even after getting humiliated but gets slapped by Vanraj in front of everyone.

Anuj and Ankush shout Vanraj's name out loud and asks what's the matter.

Barkha blasts on Vanraj and asks how dare he touch her brother to which Vanraj replies how dare Adhik to touch his daughter.

Anuj asks Anupama to speak what she actually saw and he will believe her words only.

Anupama says nothing which hints all eyes are on Adhik while Anuj asks Pakhi what's the matter.

Vanraj says this is India and every father has the right to teach a lesson to the guy who asks for his daughter's number.

Anuj suggests that Vanraj listens to the truth first while Leela starts to whine about how she didn't want to invite the Kapadia's.

Kavya asks Adhik to speak the truth, Adhik says that Pakhi is just her friend and he wanted to talk to her in silence.

Barkha puts salt on the drama by saying what kind of discussion happens in one room.

Vanraj and Ankush start to fight and argue which irritates Pakhi and she says that she went with Adhik with her own consent.

Vanraj's eyes turn red and Toshu comes running toward Pakhi and says she is not aware of what she is saying.

Pakhi asks everyone to stop and understand that a boy and girl can be friends as well.

Leela tries to explain that it is impossible to be friends with the opposite sex while Pakhi says just like Kavya was friends with Vanraj.

© Copyright tellybest.com, 2022, 2023. All Rights Reserved. Unauthorized use and/or duplication of any material from tellybest.com without written permission is strictly prohibited.
Cached Saved on: Wednesday 25th of January 2023 10:16:25 AMCached Disp on: Thursday 9th of February 2023 08:04:45 AM