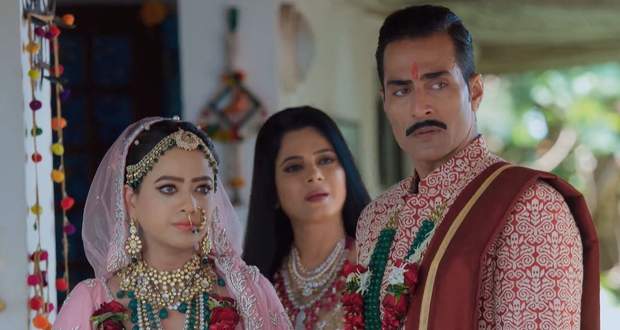 Kavya stops her and shows off her Mangalsutra while Anupama says that she can wear it only because she removed hers.

Kavya apologises to Leela and does her Grahpravesh after which she and Vanraj take the elders blessings.

Hasmukh says that he is going to live with his daughter Anupama and leaves while Leela goes with him.

Dolly and others follow saying that they cannot live with Kavya.

Anupama gets shocked seeing Shah's at her front door and lets them in while Kavya tries to reassure Vanraj that she will convince everyone.

Rakhi tells Kavya that the Shah family might come back while Kavya reveals that she has already planned something for them.

Further, Rakhi goes to Anupama's room where the Shah family taunt's her and makes her leave with Anupama suggesting she stay in Kavya's room.

Elsewhere, Vanraj and Kavya argue while he tells her to learn how to speak to his family.