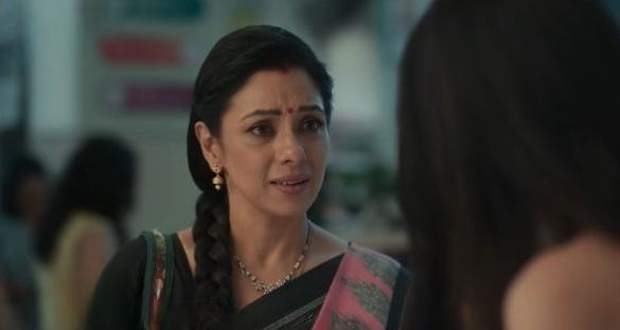 Today's Anupama 4th June 2022 episode starts with Anuj getting excited to see Barkha and introduces Anupama to her.

Later, Anupama and Barkha talk about how the relationship of Jethani and Devrani is defamed by fighting but there's nothing like that.

On the other hand, Kinjal requests Leela to visit the music festival but Leela refuses.

Pakhi, Samar, and Toshu leave for the concert and Vanraj reminds Toshu to take care of Pakhi as it will be crowded.

Meanwhile, Ankur and Anuj celebrate by spraying champagne and Ankur calls Anupama sweeter than they anticipated.

Anuj clicks a picture with Ankur and Barkha while Anupama looks at her empty photo frame hanging on the wall.

Anupama says that she received her in-laws today and is happy.

On the other hand, someone suspiciously video-records Pakhi while she dances.

Later, a creepy guy dances behind Pakhi who is shooed away by a guy named Rommie.

Meanwhile, Samar talks to his friend about his painting, and a girl interferes with their conversation talking about the meaning behind the painting.

Further, Anupama offers to make laddoos and Kheer while Barkha says they don't like sweets.

On the other hand, Ankur seems to like sweets and suggests Barkha should let her make what she wants.

Barkha says that she had prepared today's lunch and lists out fancy names of some European dishes.

Anupama feels alienated after hearing all the fancy names while Anuj explains them to her.

After some time, Ankur and Anuj laugh together teasing their wives about how they cannot understand their words.

Barkha seems to feel humiliated by the little teasing and asks Anupama if she does not feel bad about getting teased by her husband.

Replying to Barkha, Anupama says that it is a sign of a healthy relationship and feels happy to see them laughing.

Later, Barkha and Ankur seem to be having differences and Barkha talks about how lovey-dovey both are.

Ankur taunts Barkha by saying love cannot be hidden and walks away.

© Copyright tellybest.com, 2020, 2021. All Rights Reserved. Unauthorized use and/or duplication of any material from tellybest.com without written permission is strictly prohibited.
Cached Saved on: Friday 5th of August 2022 03:11:22 AMCached Disp on: Saturday 13th of August 2022 11:57:49 PM