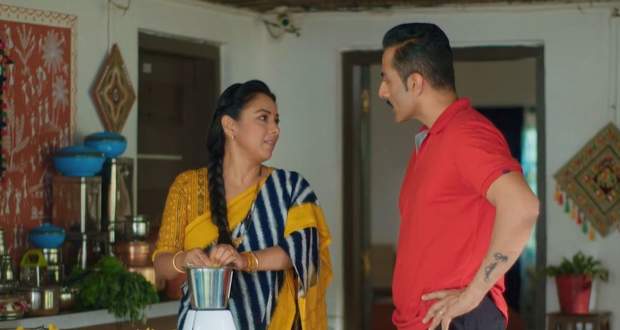 Today's Anupama 4 May 2021 episode starts with Anupama and Vanraj planning Samar and Nandini's engagement and him going to talk to Kavya about it.

Kavya looks at the bracelet Anupama had given her and remembers her promise.

Vanraj talks to Advait who makes him laugh and they talk about music.

Anupama meets Kavya and assures her to believe in her.

Later, Vanraj meets Kavya and tells her about the engagement, and says that he wants to give Anupama happiness.

They argue and he raises his hand but stops it before he can hit her.

Anupama comes there and rebukes him for raising his hand on a woman.

She scolds both of them and leaves but Vanraj goes after her.

She tells him that she doesn't need or want him and tells him to focus on his relationship with Kavya.

© Copyright tellybest.com, 2020, 2021. All Rights Reserved. Unauthorized use and/or duplication of any material from tellybest.com without written permission is strictly prohibited.
Cached Saved on: Monday 17th of January 2022 10:41:41 PM