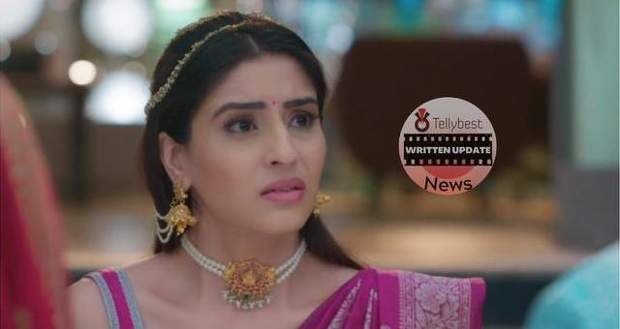 Today's Anupama 4th November 2022 episode starts with Anupama going into Anu's room and cuddling with her.

Pakhi sees all of this and recalls Adhik telling her that Adhik and Pakhi should sleep in separate rooms till the family accepts their marriage and he also says that Pakhi should talk to Anupama as she broke her heart.

Pakhi cries in front of Anupama and lets her know that she is positively terrified of what lies ahead and lays down in Anupama's lap.

Pakhi also pleads with Anupama, that she can be as angry as she wants but begs her to at least hug Pakhi and they embrace.

Meanwhile, at the Shah's, Vanraj forgot Pakhi's wedding and calls out her name, only for realization to strike like lightning, when Paritosh arrives and wishes a happy new year to everyone.

On the other hand at the Kapadia's everyone blesses the young bridegroom except Barkha and Anupama who wishes from a distance.

Adhik further asks Anuj to consider him for a job in his company as now he has responsibilities.

Anuj tells Pakhi-Adhik that today he and Anupama will be going to the Shah house to talk about them.

In the meantime, there is utter silence and despair at the Shah residence where everyone is nostalgic about Pakhi's antics.

Kavya asks Vanraj if he can ever forgive Pakhi to which Vanraj responds by saying he doesn't know.

Samar and Paritosh try to pacify Vanraj asking him to give another chance to Adhik as everybody has room to change.

Meanwhile, Barkha tells Adhik that she knows he is putting up a facade with Pakhi.

Adhik pleads with her and tells her that isn't the case as he genuinely loves Pakhi.

Barkha then says that she knows Adhik in and out and so she knows he must have an ulterior motive.

However, Adhik shockingly responds with a yes, unknown to him Barkha has recorded their conversation.

But, Adhik knows she is recording and that's why he said yes and asks her to not interfere between them.

Meanwhile, Anuj and Anupama are discussing with the Shah's getting Pakhi-Adhik remarried with all the rituals.

Vanraj tells them point-blank that he will not perform any fatherly duties at the wedding.

Anupama tells herself that Vanraj won't be able to stay angry at Pakhi at the time of the wedding and will happily do all rituals.