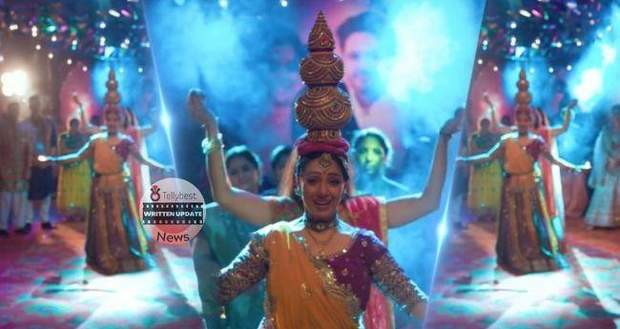 Today's Anupama 4th October 2022 episode starts with eight days after the incident and Anupama telling Anu the importance of Navratra.

Anupama and Anuj discuss the Kanya puja on Ashtami with Anu as they lay back in their living room with others.

Anu gets excited after she hears that she and Anupama are going to the Shahs to celebrate Ashtami.

Anupama assures Anuj that Toshu will not come near Anu under any circumstances, relieving his tension a bit.

Suddenly, some women arrive at Anuj’s house to invite Anuj and Anupama as the chief guests at the Garba event in the neighborhood.

Anuj and Anupama reminisce their memories from that same Garba event and promise to come there and do the needful.

The ladies inform Anupama that they want her to facilitate a girl that deserves honor for her achievements.

As Anuj gives a cheque to the women with a huge amount on it so they can utilize it for the girl’s education, Barkha and Ankush get irritated.

While the ladies prepare to leave, Barkha asks them to do something about the Shahs as someone needs to show their real faces to society.

Meanwhile, Leela informs everyone in the family that she has arranged a meetup for Samar at the Garba event meant for marriage.

Rakhi mocks Leela for trying to wed her second grandson when her first grandson’s marriage is on the verge of breaking off.

Further, Rakhi says that no girl can stay happy after marrying this family as everything is wrong here.

Samar comes downstairs and declares that he does not want to marry anyone as he fears relationships after seeing so many broken ones.

Remembering how he barely managed to control himself after Nandini left, Samar says that he is afraid of not being a perfect husband and wants to be alone.

Vanraj and Hasmukh try to make Samar understand that not every marriage is the same while Rakhi supports Samar’s decision.

Later, the Kanya puja starts with Hasmukh and Vanraj worshipping all little girls including Anu and Pari.

Paritosh gets denied to do the puja by Vanraj as Anupama does not want him anywhere near Anu.

Hearing this, Paritosh becomes angry inside and decides that he will do whatever his heart wants.

© Copyright tellybest.com, 2022, 2023. All Rights Reserved. Unauthorized use and/or duplication of any material from tellybest.com without written permission is strictly prohibited.
Cached Saved on: Monday 21st of November 2022 01:53:06 AMCached Disp on: Tuesday 6th of December 2022 01:12:29 PM