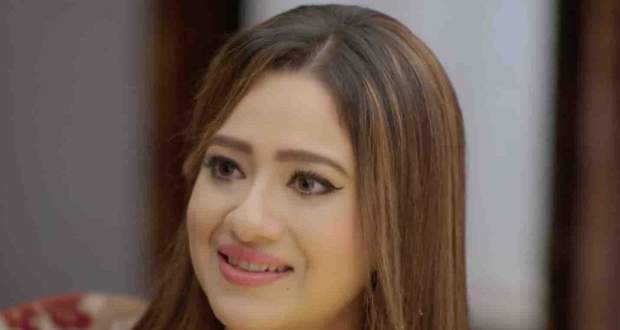 Today's Anupama 5 April 2021 episode starts with Kavya getting frustrated as Anupama and Vanraj are still not home at night.

Nandini tries to advise her to not lose her common sense and become jealous over Vanraj not coming home to her.

Meanwhile, Kinjal gives the tea to Leela and Hasmukh while thinking about how to inform Vanraj and Anupama about their sudden change in plan.

Kavya gets upset while Anirudh calls her and tells her that the lawyer wants a NOC for the property while he asks Kavya why she sounds upset.

Meanwhile, Vanraj and Anupama manage to get a hold of a phone and calls Kinjal who informs him of the situation.

However, Pakhi comes there and tells everyone that there is a curfew going on and that the road where the resort is located is also closed by police.

Kinjal tells Anupama and Vanraj to stay in the resort for the night while Leela starts dancing.

Hasmukh figures out her plan and confronts her.

Meanwhile, Kavya opens her door to find Anirudh and questions him while he tells her that he is her friend first and lets himself in.

Rakhi and Leela talk on the phone and act as Vanraj and Anupama confessing their love to each other while Kavya cries into Anirudh's arms as he consoles her.

Kavya tells him that she is feeling like a mistress and that everyone is making her out to be a villain while Vanraj also loved her as much as she loved him.

Mamaji tells Hasmukh that he doubts that Leela is doing drama while Hasmukh reveals that he knows Leela is faking it.

Kavya gets emotional in front of Anirudh while he consoles her and says that he will always be there for her.

© Copyright tellybest.com, 2020, 2021. All Rights Reserved. Unauthorized use and/or duplication of any material from tellybest.com without written permission is strictly prohibited.
Cached Saved on: Sunday 9th of May 2021 04:32:57 AM