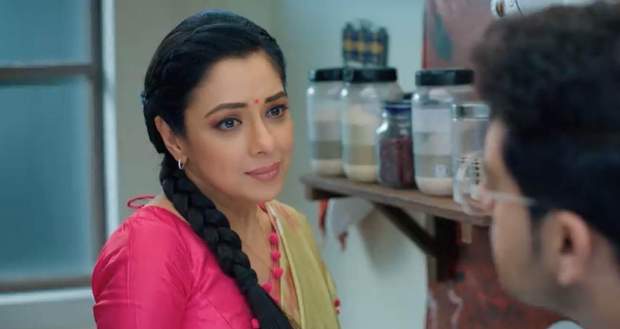 Today's Anupama 5th April 2022 episode starts with Anupama and Anuj receiving congratulations from all family members and friends and helping hands from each of them in their own way.

All supportive members from Anupama’s mother to Malvika, send voice messages to the couple showing their immense happiness.

Anupama becomes emotional hearing the heartful loving messages while Anuj exposes her on the call to everyone.

Meanwhile, Leela lets Vanraj and Kavya know how she has objectified the economic condition of the family to stop Anupama’s marriage.

However, Vanraj does not pay much heed as he has to prepare the presentation for Toshu’s friend, Yash.

Hasmukh comes and returns Leela her money and gold and informs her that he will not take anything from her for this marriage.

Vanraj and Leela ask about the arrangement of money but Hasmukh does not disclose anything and leaves.

At the same time, Anupama and Anuj spend some quality time together while painting themselves and their families.

Samar advises Pakhi about her response and support towards Anupama’s marriage which makes Pakhi feel guilty.

Reminding Pakhi how Anupama has always fought for them since their birth, Samar asks Pakhi to at least try to change her thinking for once.

Later, Paritosh arrives at the house with his friend Yash and one other man while Anuj and Anupama also reach the house gate.

Paritosh loses his cool after a while and engages in a fight with Yash, Anupama and Anuj rush to stop Paritosh from beating up Yash.

However, Paritosh pushes off both Anuj and Anupama once and asks Anupama to shut up when she tries to calm him.

Anuj warns Paritosh to correct his tone but Paritosh accuses both Anuj and Anupama for making a joke out of his life.