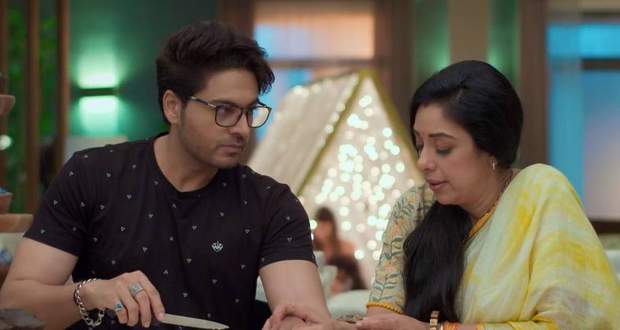 Today's Anupama 5th August 2022 episode starts with Sarah showing the Rakhis that she learnt to make in the Ashram.

Anu tells Anupama, Anuj and Sarah how she wants to tie a Rakhi to all those who protects her.

Anupama makes her understand that they would be celebrating this festival with joy but at the Kapadia mansion only.

At the Shah house, Vanraj says not to touch Anupama's topic again and celebrates Raksha Bandhan with full enjoyment.

The next morning, the Shahs and Kapadias venerates the lord. While the Kapadias do it with a big smile on their face, the Shahs looks sad.

Anu and Pakhi tie Rakhi to Lord Krishna at their houses respectively.

Barkha and Ankush worry about Anuj’s decision but decide to stay calm and patient. Anuj overhears their conversation.

At the Shah house, Dolly, Baa and Pakhi tie Rakhi to their brothers respectively while Kinjal waits for Samar.

Dolly is upset and starts crying as Anupama isn’t there for the first time on an occasion.

She expresses her grief about not seeing Anupama and is upset over the fact how she was treated earlier.

Vanraj tells Dolly that nothing lasts forever and now Anupama only cares about the Kapadias.

However, Pakhi shocks everyone by admitting her mistake.

Dolly and Kavya decide to go to the Kapadia mansion to celebrate Raksha Bandhan as there would be no better day to resolve their differences.

At the Kapadias Anu waits for the Shah family to come and becomes sad when he tells him to tie Rakhi to Anuj only as they are stuck with some work.

Soon, Anu notices someone holding a huge teddy bear, and she is overjoyed to see Samar.

Anupama is overwhelmed to see Samar as well.

Samar shakes a leg at the Kapadia’s and greets everyone nicely and warmly.

Both Anu and Anupama thank Samar for coming to their house while Samar tells how her and Anupama’s happiness would remain incomplete till he’s around.

Samar tries to cheer Anupama up and tells her to stay smiling.

Meanwhile, Anu calls Kavya and tells her to put the phone on speaker.

She very nicely greets everyone and tells her how gloomy the festival has turned without their presence. And tells all of them Samar is already here which leaves Vanraj furious.

Kavya and Kinjal tell everyone even a small kid has such a big heart and is so sensible that she is suggesting all of us to reconcile.

Both of them get into a heated argument with Vanraj and Toshu whereas Dolly supports them too.

Pakhi was about to step ahead but stops when Vanraj tells her to.

© Copyright tellybest.com, 2022, 2023. All Rights Reserved. Unauthorized use and/or duplication of any material from tellybest.com without written permission is strictly prohibited.
Cached Saved on: Wednesday 25th of January 2023 11:46:33 AMCached Disp on: Thursday 9th of February 2023 08:32:02 AM