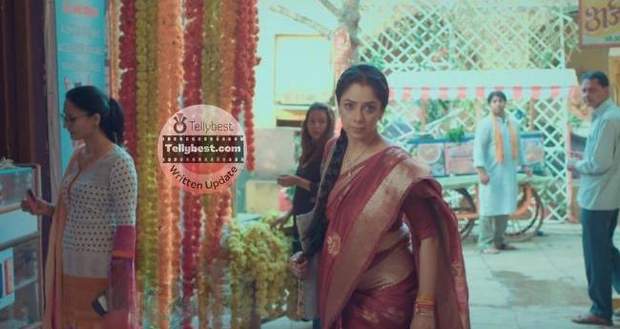 Today's Anupama 5th December 2022 episode starts with Anupama telling Anuj about the things they need to do and the schedule for the next day.

Anuj pins a cauliflower in Anupama’s hair and compliments her look saying that she is looking pretty.

Holding onto Anupama’s hand, Anuj asks her how she is capable of doing everything at the same time without forgetting the smallest details.

Anupama replies that these small details are part of their life which she dares not forget even if she wants.

Anupama thanks Anuj for always being there with her and plants a kiss on his cheek making Anuj flash a smile.

Later, Anupama meets with Samar, Kavya, and Kinjal while Anuj and Ankush discuss something important with the police.

Kavya, Kinjal, Dimple, and Samar help Anupama in finding something while the police hear some plans from Anuj and Ankush.

Vanraj asks Leela where Kavya and Kinjal are to which Leela replies that they are not at home since the morning.

Samar, Kavya, and Kinjal come back home while Vanraj and Leela confront them for leaving the house.

Kinjal says that they cannot sit back and watch Anupama fighting by herself.

Samar makes it clear that even if supporting Anupama brings danger to himself, he will not hesitate to jump to help his mother.

Later, as the three of them discuss things within themselves, Vanraj says that he will never see Anupama’s face if anything happens to his family.

Anupama walks strongly to a new locality and stops after coming in front of Vijendra Mehta’s house.

As a housewife opens the gate after hearing Anupama’s knock, many residents gather to check what is going on in Mehta’s household.

The housewife gets surprised to see Anupama as she says that she wants to meet Mr. Mehta.

Anupama tells the lady that it is not her fault that her son turned out like that, but even after knowing her son’s habits, she is supporting him which is wrong.

That boy spots Anupama there and comes out scorching in anger and falls to the ground by slipping.

Anupama rests her feet just above that boy’s face and says that every villain meets a hero in their lifetime who ends their rule.

Meanwhile, Dimple asks Anuj why he is not scared for Anupama as she has gone there alone.

Anuj says that sometimes supporting people means taking a step back and he always knew that Anupama is a self-dependent person.

Vijendra Mehta comes out and asks Anupama what is going on there.

Anupama tells Vijendra that she has come to give him a warning as he is saving his son.

Anupama gives Vijendra a day to hand over his son to the police and says that she will destroy his son’s life if he remains outside the lockup even after that.

Vijendra asks Anupama to leave which Anupama obeys and leaves with her head high.