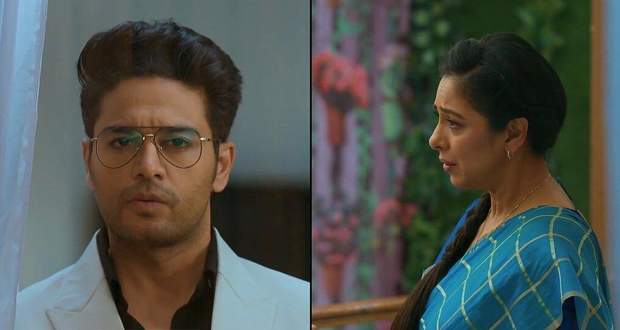 Today's Anupama 5 January 2022 episode starts with Anupama and Anuj walking together on the road, Anuj holds her hand surprising Anupama.

Both steal glances and continue their walk to their home.

Later, Kavya chides Malvika for always clinging to Vanraj and asks her to be professional with her partner.

Malvika shows her a picture of Kavya hugging Vanraj in the past and calls her a husband thief which infuriates Kavya.

Malvika asks her to work and offers her a job like Toshu in their new project, Kavya overwhelms with joy.

But Vanraj comes and refuses to agree on giving Kavya a job in their project, Malvika says she can’t force Vanraj and if he is refusing then Kavya can’t work with them.

Kavya asks Vanraj why she can’t work with them on their project. Vanraj replies that she will work less and suspect more in the office.

Vanraj asks her to find a job anywhere else as he can’t bear her all day at the office.

Meanwhile, Anuj adjusts Anupama’s saree and subconsciously tells her that if she was Malvika’s sister-in-law then he would do it regularly for her.

Later, GK aka Jignesh asks Anuj what he said to Anupama surprising Anuj.

GK asks Anupama directly if she loves Anuj or not, Anupama says yes.

GK was about to tell Anuj about her feelings but Anupama stops him and asks him to not tell him now.

She tells him that once she will make sure that the relationship between Anuj and Malvika has returned to normal, then she will confess her love to Anuj.

Anupama promises to GK about confessing which Anuj oversees and gets confused about not knowing what is going on.