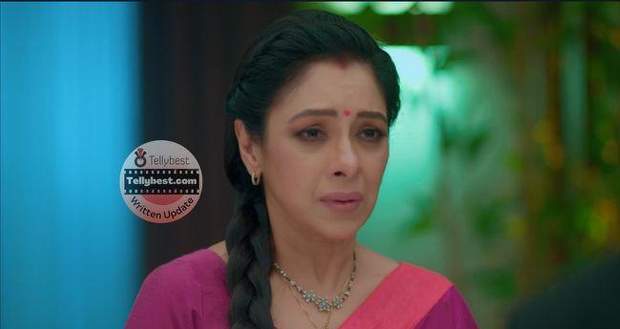 Today's Anupama 5th January 2023 episode starts with Hasmukh telling Anupama that she needs to look after her own family and household, not others.

Hasmukh says that Anupama can never remodify the behavior of her two children, Toshu and Pakhi as they have gotten accustomed to that manner.

Coming to Leela, Hasmukh says that no women like Leela anywhere know how to poison everything.

Hasmukh tells Anupama that the others will seek support from her as long as she acts as a supporter.

Anuj joins his hands and tells Hasmukh that he is done with the Shah family’s fights and arguments and does not want to deal with them anymore.

Anuj says that they fight amongst each other like it is some war ground and he is not ready to go on like that.

Coming to Anupama, Anuj tells her that he loves her very much but begs her to make Anu and him her first priority as they are also a part of her life.

Anupama gets heartbroken seeing Anuj’s tears and asks him what he is doing by begging like that but Anuj says about his new year plans that he planned with Anu and her.

Anuj’s voice visibly breaks down as he tells everyone that he is suffering after sending away his daughter from him in the new year.

Requesting in front of Hasmukh and Vanraj, Anuj says that from this new year, they should look after their own families and Leela should not call Anupama on every occasion.

Hearing people’s cheers outside, Anuj brings two party poppers and pops them with a broken laugh to congratulate everyone a new year in advance.

The Shah family leaves with Pakhi-Adhik, Samar-Dimple, and Barkha-Ankush also leaving for their planned events.

After returning home, Vanraj and Leela start targeting Kavya to which she says that she spitted the truth there.

Vanraj says that Anuj’s point is not false at all and announces that he will reject the Delhi job offer to take care of his family which makes Kavya angry.

On the other hand, Anuj tells Anupama that they expect different things from each other and he is afraid that those expectations will not fit in with each other.

Anuj asks for some alone time while Anupama starts to shed tears.

Vanraj tells Kavya that he cannot destroy his present surroundings to build his future, to which Kavya says she has decided for herself.

At the same time, Pakhi and Adhik enjoy the festivals together and spend quality time.

Pakhi asks Adhik if they can make a fresh start in the new year to which Adhik agrees and proposes to Pakhi again.

Toshu asks Kinjal to go to a party with him to which Kinjal replies that they are not a couple to go to social gatherings anymore.

Toshu says he is trying his best to redeem his mistakes but cannot do anything further than that while Kinjal states that it is impossible for her to forget everything instantly.

Leela asks Hasmukh to come and sleep to which Hasmukh replies that he wants to die peacefully.

On the other hand, Barkha and Ankush come to a hotel for a party where Ankush starts drinking heavily in their room.

Ankush asks Barkha why he has to bear the tag of failure when they have equal rights in their relationship.

Ankush drinks while Barkha cries in a corner as Ankush is not even trying to start a competition out there in the world.

With 10 minutes left to start the new year, all the couples seem to be scattered into scrambles with grief and sadness residing.