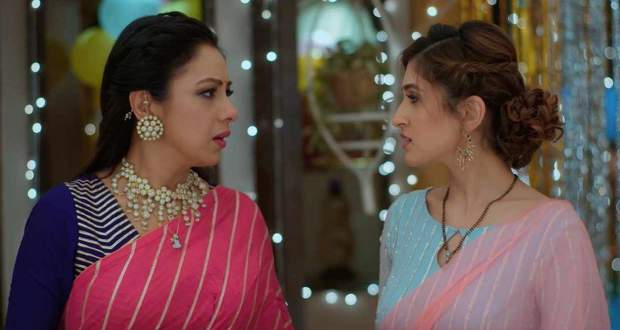 Today's Anupama 5th March 2022 episode starts with Rakhi agreeing to Kinjal’s request about staying at the Shah residence during her pregnancy for her happiness.

Kinjal explains that with arguments and fights, festivals and happiness are also celebrated equally in that house and everyone including Leela, Hasmukh, Samar are there to care for her.

However, Rakhi intrudes in between Kinjal’s words by saying that Anupama will not be there with Kinjal in that house.

Kavya tells Rakhi that she will take care of Kinjal and Rakhi mocks Kavya ranting the things she has to check on regularly making her panic.

Keeping aside her ego, Rakhi agrees with the fact that Anupama’s presence in that house will ensure Kinjal’s welfare and safety.

Rakhi tells Anupama that if her absence leads to Kinjal’s problems, it will also cause her problems and Rakhi’s unhappiness will bring doom to the entire Shah family.

As Rakhi leaves, Anupama takes Kinjal to her room to rest and congratulates Paritosh on becoming a father.

She tells Toshu that even if he might be a bit scared about the situation, being a father is the happiness of seeing one’s childhood again through his child.

However, Paritosh keeps silent and encounters Kinjal inside the room who hugs him expressing her happiness.

Breaking all of Kinjal’s expectations, Paritosh announces that he is not ready for a child and does not want to be a father currently.

Kinjal reminds him that bringing a baby was a mutual plan between them and she will not sacrifice the baby at any cost.

Glaring into Kinjal’s eyes, Paritosh declares that he will not take any responsibilities of a father.

Kinjal breaks down into tears as Paritosh leaves after announcing his decision.

Meanwhile, the whole family discusses the names of babies and laughs together, even Anupama and Vanraj seem to forget their current tension.

On the other hand, Anuj thinks about Anupama and becoming a grandfather indirectly and gets happy thinking of that feeling.