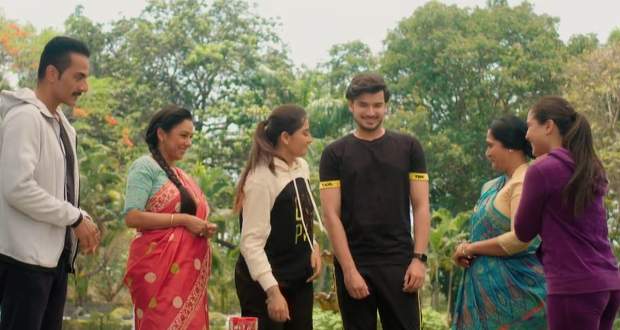 Today's Anupama 5 May 2021 episode starts with Advait doing the laughter therapy with the Shah's.

Samar and Nandani's engagement is announced and Leela does drama at first but agrees to it.

Nandani leaves. Samar goes after her and tries to cheer her up.

She says that they should reveal the truth to everyone but he denies saying that he doesn't want to give stress to Anupama.

Anupama and Vanraj have tea and talk about the preparations for the engagement.

Advait makes Ladoos with Leela and Anupama and requests them to teach him how to make Ladoos.

Meanwhile, Nandani tells Kavya about the engagement and she tells her that she is happy for them but feels sad for her own luck.

She gives her lehenga to Nandani and gets emotional while Nandani calms her.

Vanraj gets a call from her lawyer informing him that their divorce date is fixed.

However, he feels tensed and says he does not wish to get divorced which Kavya overhears and gets shocked.

© Copyright tellybest.com, 2020, 2021. All Rights Reserved. Unauthorized use and/or duplication of any material from tellybest.com without written permission is strictly prohibited.
Cached Saved on: Monday 17th of January 2022 10:24:13 PM