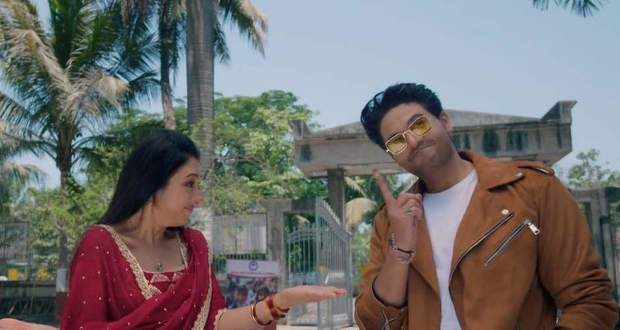 Today's Anupama 5th May 2022 episode starts with Anuj taking Anupama to their college and reminiscences of the older days.

Anuj and Anupama go to all the spots that are important to them.

Anuj joins in by stating the bully's name and Anupama catches the hint.

Surprised that Anuj would do something so huge for her when they barely knew one another, Anupama's eyes are filled with tears of joy.

Asking Anuj to tell her everything Anupama holds his hand and they resume their tour.

On the other hand, Hasmukh hides the reports from everyone but Vanraj spots him and gets suspicious that Hasmukh is hiding something.

Vanraj slides into Hasmukh's room and sees the reports that Hasmukh's been hiding carefully under his pillow.

Taking the picture of the prescription Vanraj enquiries at a medical store regarding the medicines only to find out that they are vitamins.

Little does he know that the real prescription accidentally went along with DK.

Here, Anuj and Anupama sit on the college beach and wish they could get the 27 years that they lost in life.

Just then, Anuj thinks of a great theme for the functions.

After their college date ended Anuj proposes another surprise for Anupama.

Both of them leave for the second surprise which turns out to be a romantic picturesque date.

Dressed in black neither Anuj nor Anupama can take their eyes off one another.

On the other hand, all the children grind Mehendi for Anupama and Anuj's Mehendi function and talk about how lucky and great both of them look together.

Vanraj overhears his children's conversation and is filled with tears as they think Anuj is better for Anupama than anyone ever will be.