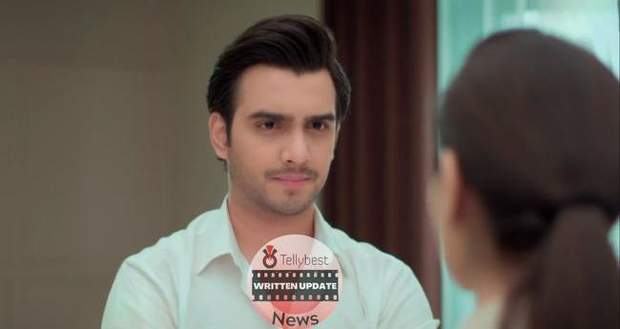 Today's Anupama 5th November 2022 episode starts with Vanraj leaving in a huff as he can't bear to hear the details of Pakhi's wedding.

Anupama goes after him and tries to convince Vanraj to let go of his anger and perform Kanyadaan.

Anupama further tells him that everything that has happened in their house right from Vanraj's infidelity to her getting married to Anuj has resulted in Pakhi taking such a step.

Vanraj asks Anupama if she genuinely feels that Adhik is trustworthy or not as he feels otherwise.

Anupama tells Vanraj that there is no guarantee about Adhik, but when Vanraj will perform all the rituals Pakhi will feel supported and loved, and if Vanraj doesn't then he will have regret for a lifetime.

Meanwhile, at the Kapadia's, Pakhi is stressed about the family's reaction and tells Adhik about the aspirations she had for the wedding.

Anupama and Anuj arrive and tell everyone about the good news which elates Pakhi and Adhik but Barkha is surprised at Vanraj's reaction.

Anupama tells Adhik that she had a lot of aspirations about Pakhi's wedding which had all got washed away, but now she has another chance.

Anupama further tells him that she has an intuition that is telling her that this wedding will be a bleak affair.

Anuj reassures her saying that it won't be so as soon as Barkha and Vanraj agree, Anupama concurs.

Barkha who eavesdrops on their conversation makes up her mind that she will never bless the union and she will do whatever it takes to secure her future.

In the meantime, Leela and Hasmukh tell the Shah that the auspicious date will be known by tomorrow.

Leela and Hasmukh also tell everyone that the Shahs should take the initiative to organize everything for Pakhi's marriage, and not bother Anupama and Anuj.

© Copyright tellybest.com, 2022, 2023. All Rights Reserved. Unauthorized use and/or duplication of any material from tellybest.com without written permission is strictly prohibited.
Cached Saved on: Monday 21st of November 2022 03:50:58 AMCached Disp on: Thursday 1st of December 2022 11:36:28 AM