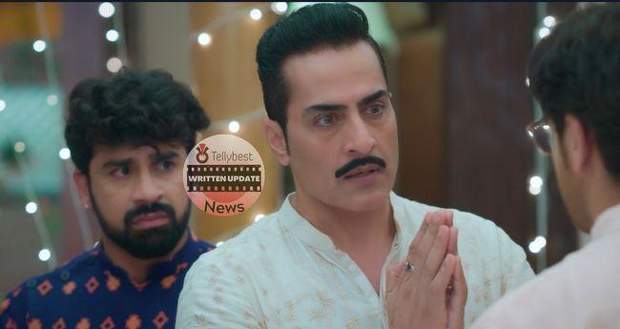 The Kanya puja gets over with all the girls receiving gifts from Vanraj and getting happy after opening the gifts.

Leela asks everyone to gather at the Garba event at night when Anupama and Vanraj say that Toshu will not go with them.

Seeing her grandson getting obliterated, Leela asks everyone why Toshu cannot attend the function alongside them.

Anupama says that they do not want him near Anu or Pari after what he tried to do the other day.

Further, Kinjal announces that if Toshu comes to the Garba event, she and Pari will not attend it.

Hasmukh and Samar support Kinjal’s decision while Toshu clenches his jaw in anger and decides to visit everyone at the Garba event for sure.

Later, the night of the function arrives and Leela begins to mock Kinjal in secret for being like Anupama and leaving her husband behind.

Kinjal and Rakhi come out of the house with Pari and join others to go to the event while Leela intentionally says that no one cares about Toshu.

After arriving at the function, everyone from the Shah family notices Anupama and Anuj’s photo on the stage and learns they are the event’s chief guests.

After learning the fact, Leela makes a sour face and expresses her wish to not see Anupama and Anuj as all high and mighty.

Meanwhile, Anupama and Anuj arrive at the event with GK and Anu.

Anu goes inside with Meenu followed by GK while Anuj gets to see Anupama in her full-on Garba look for the first time.

Anuj compliments his beautiful wife and reminds her of her first Garba with him at the same place with him.

At Anuj’s request, Anupama flaunts her dress by swirling around a bit while Anuj looks at her with warm eyes.

Everyone welcomes Anuj and Anupama with a bash and they greet everyone in the Shah family first.

Leela mocks Anupama for being the “main character” at the event and asks her to click pictures with her fans.

Anupama and Anuj tell everyone that they just wanted to spend the festival with their families and agreed to come for that reason.

As Anupama and Anuj go to the stage to inaugurate the event, Leela asks Samar to go and check on Toshu which he refuses to do.

Toshu secretly watches everyone having fun together and burns in envy.

Barkha, Ankush, and Adhik also arrive there and eye-sneering begins between Pakhi and Adhik.

The organizers announce that Leela will be awarded for her contribution to the event and request Anupama to facilitate her.

Leela’s laugh disappears as she realizes that she has to accept the award from none other than Anupama.

© Copyright tellybest.com, 2022, 2023. All Rights Reserved. Unauthorized use and/or duplication of any material from tellybest.com without written permission is strictly prohibited.
Cached Saved on: Monday 21st of November 2022 06:05:02 AMCached Disp on: Tuesday 6th of December 2022 01:02:59 PM