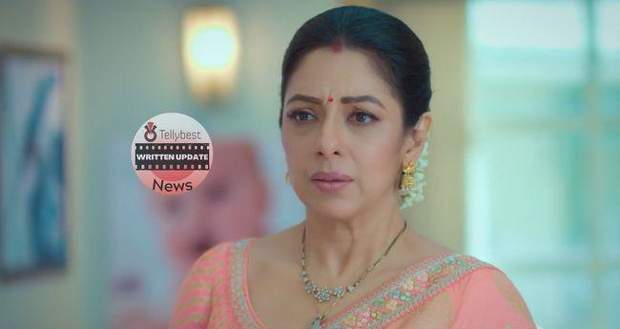 Today's Anupama 5th September 2022 episode starts with Toshu begging Rakhi to not tell anything and Rakhi agrees because of the baby.

She warns him if he repeats his mistake she will tell Anupama and Anupama will deal with him.

Suddenly Anupama comes to them and Rakhi asks why she returned to which Anupama tells she forgot her phone.

Toshu goes to get her phone and Rakhi tells Anupama she does not know about her son completely.

Anupama gets shocked and when Toshu requests to drop her she takes his hand and put it over hers.

Anupama asks him to swear on her and tell her whatever Rakhi said to him but Toshu only says half-truth and removes his hands.

He tries to make her believe that he will take good care of Kinjal and the baby.

Anupama warns Toshu that if he breaks her trust then she also doesn’t know what she’ll do to him.

Meanwhile, Anupama comes into her home tired and worn out by the day and sees Anuj waiting for her in the living room.

She goes to him and asks why he hasn’t slept yet to which Anuj exclaims that he was waiting for Anupama.

Anupama and Anuj share a moment of romantic talk when Anupama tells him that doctor has said that he must begin practicing walking a little.

Anuj complies and Anupama is taking him to his room when they see Barkha in the kitchen.

On being asked what she is doing, Barkha says she is making pancake dough for Choti as tomorrow’s breakfast.

Anupama is unable to digest it when Anuj tells her that Ankush and Barkha took good care of them while Anupama was busy and Anuj has not forgiven them but noticed the efforts.

Meanwhile, in the Shah house, Vanraj is recording a lullaby to send to Kinjal for the baby.

Kavya comes in and gets impressed with his efforts to which Vanraj says he will do everything for his granddaughter.

Kavya gets very happy to see her husband smiling after a long time.

Suddenly she says something about her and Vanraj's baby but gets silent and Vanraj hugs her to console her.

On the other hand, Leela and Hasmukh are having their moment while making sweets for Kinjal when Samar barges in apologizing to ruin their romance.

He gives them turmeric milk on Anupama's order and goes away ranting childishly when Leela says his wife will be very lucky to have him.

Meanwhile, Rakhi is in the hospital room crying in pain to see her daughter dreaming about Toshu.

Rakhi hears the cry of the baby and takes her in her hand.

She sings a lullaby to make the baby sleep and swears that she will fight any power in the world to protect Kinjal and her granddaughter.

© Copyright tellybest.com, 2020, 2021. All Rights Reserved. Unauthorized use and/or duplication of any material from tellybest.com without written permission is strictly prohibited.
Cached Saved on: Sunday 2nd of October 2022 01:07:47 AMCached Disp on: Wednesday 5th of October 2022 06:11:20 PM