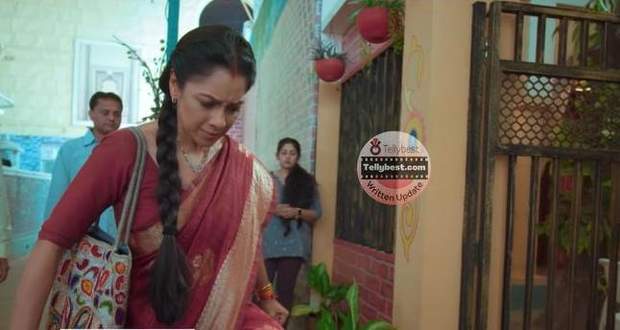 Today's Anupama 6th December 2022 episode starts with Vijayendra Mehta calling inspector and asking him to make a complaint against Anupama's baseless threat against him.

The inspector remains calm and tells Vijayendra that he needs to come to the police station to file a complant.

After cutting the call, Inspector turns to Anupama & lets her know that he saw everything she did at Vijayendra's place.

Anupama gets delighted when the inspector says that for some things, common man & law needs to come together.

Later, Anupama urges Dimple to say whatever was done to her by Mananth as the media covers her statement live.

Samar also stands beisde Dimpy & records her statement while Anupama asks her not to be scared.

Just then, Mananth comes out and covers his face when the camera lights flash on him.

He gets angry & threatens Anupama that he is not going to spare her.

Anupama stands her ground fearlessly and taunts Mananth to do whatever he is capable of right now.

Vijayendra asks Mananth to come inside while Kavya & Kinjal step forward and ask him to say more as the whole India is watching his "wonderful" deed.

Mananth & Vijayendra go inside, deciding not to spare anymore.

At Shah House, Vanraj sees the live streaming & gets angry along with Leela who says even Kinjal & "Maida Ki Katori" went with Anupama.

When Kinjal & Kavya return back home, Vanraj says he will not let them go out anywhere, even for office work.

Kavya asks Vanraj to lower down his voice along with Kinjal who states they aren't doing anything wrong.

Leela mumbles that Anupama will take everything down with her & Kinjal happily says that they haven't returned back to stay.

Kavya asks Pakhi why she did not realize her drama when she eloped and got married.

Meanwhile, the society supports Anupama as she learns that Vijayendra also manhandles his wife and daughter.

Anupama, along with Kavya, Kinjal, Dimple, & Samar go on a strike when Anuj comes to meet them along with Little Anu.

However, Anupama feels bad once she gets to know Vijayendra's daughter is getting married.

One of the old ladies tell Anupama that what she is doing is not wrong as the groom's family must know the reality of the sinister, Vijayendra Mehta.

Dimple says that she doesn't want to ruin another girl's marriage.

However, later, a paper flies to Anupama from Mehta's balcony and it is a note sent by Vijayendra's daughter, Piya.

In the note, Piya asks Anupama to continue what she is doing & get Mananth arrested.

Anupama gets strong and counts backward as all the lights go off in the Mehta's Household.

Mananth & Vijayendra come out while Anupama along with all the ladies hold torches in their hands and flash onto their disgusting faces to mass boycott them.

© Copyright tellybest.com, 2022, 2023. All Rights Reserved. Unauthorized use and/or duplication of any material from tellybest.com without written permission is strictly prohibited.
Cached Saved on: Wednesday 25th of January 2023 10:26:59 AMCached Disp on: Monday 6th of February 2023 05:06:55 AM