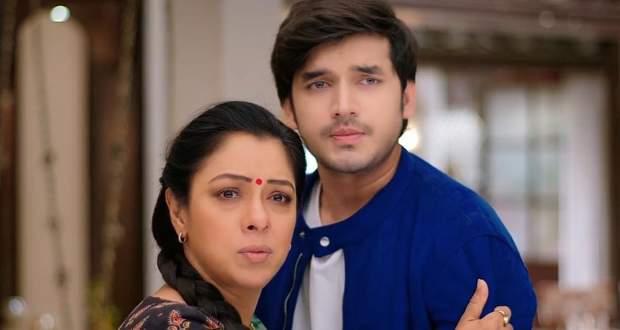 Today's Anupama 6 February 2021 episode starts with Samar returning home while a worried Anupama relaxes seeing him and hits him.

At the same time, the police come there and announce that they are there to arrest Samar as Kavya has filed a complaint that she has risk from him.

Anupama questions Samar if he had gone to Kavya's house and he accepts telling what happened there.

The police take away Samar while Anupama runs after the police vehicle and falls.

The police tell Samar to sit in the bench while Anupama comes there and hears the Inspector's conversation with Kavya.

Kinjal, Paritosh and Nandani reach the police station Anupama leaves after telling them to take care of Samar.

Anupama reaches Kavya's house and bangs on her door when Vanraj opens the door and gets angry at her.

She barges into the flat and gets furious seeing Kavya and tells her that she has made a grave mistake by hitting jer children and putting Samar's future at risk.

Vanraj shots what happened while Anupama realises that Kavya didn't tell Vanraj about it.

She tells Vanraj that Kavya has failed a complaint against Samar to police and the police dragged him from their house to the police station.

Vanraj asks Kavya if it is true and she angrily accepts while justifying that she was scared Samar would hit her when both Anupama and Vanraj shouted that Samar can never do that.

Anupama tells Kavya that she'll her where Lord Krishna was born but Kavya doesn't understand the reference when Vanraj tells her that she is talking but sending her to jail.

Anupama says that Vanraj did wrong but staying silent during Kavya's drama and that she wouldn't have sent her son jail if she would've been stopped earlier.

Anupama says that Kavya sent Samar jail on false accusations but she will recite all the true accusations for both of them to the police and will put them behind bars.

She tells Vanraj that he can call anyone and gets help but she will not spare them and walks away.