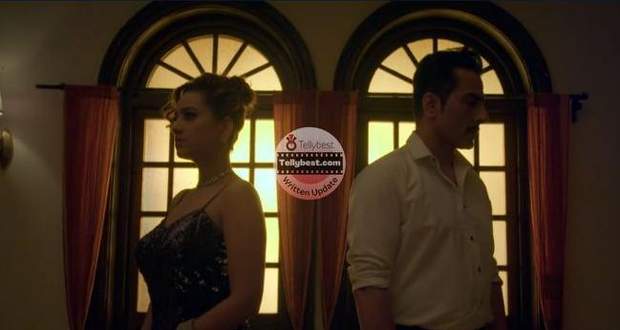 Today's Anupama 6th January 2023 episode starts with Anupama crying in her room while watching her, Anuj, and Anupama’s photo as she failed to protect their happiness together.

Kavya breaks the mirror of the washroom after getting swamped with anger and grief as Vanraj just decided to reject the job by himself.

Vanraj sheds tears remembering his happy moments with Kavya and the current situation.

Toshu sleeps outside on a bench with one of Pari’s toys while Kinjal cries inside the room remembering Toshu’s words about doing his best to satisfy others.

Leela wraps a blanket around Hasmukh and cries as she remembers Hasmukh’s wish about dying.

Adhik and Pakhi welcome the new year together as they enjoy themselves with the crowd on the streets.

Samar and Dimple attend their dance event and perform together while Samar continues to think about Leela’s words about him and Dimple.

Barkha gulps down some pills and fakes clicking a happy pic with Ankush while he goes to sleep after getting drunk but breaks down into tears midway.

Anu calls Anuj and Anupama at 11:59 pm and welcomes the happy new year with them making both emotional.

With the clock striking midnight, all the people celebrate the arrival of the new year while the Shah and Kapadia family seems to be in deep grief.

The next morning, Anupama comes out to do the puja of the tulsi tree and gives water to the tree as the sun rises in the sky.

Anupama prays to the sun and says that the sun has infinite patience and shines equally bright for eternities on the earth.

Wishing happiness to everyone in the world along with the birds and animals, Anupama starts her wish for the new year.

Anupama accepts that she made a huge mistake the previous year but promises the sun god that she will correct everything.

She says that she loves Anuj dearly and has hurt him with her actions which she will not repeat this year at all.

Meanwhile, Leela tells Hasmukh that she has realized that she never treated Anupama with respect and is apologetic for that.

Leela says that she is ready to handle all the responsibilities of that household as the eldest head of the family which impresses Hasmukh.

Hasmukh assures Leela that he will be there with her on that journey as long as she is correct.

Vanraj brings the groceries and other necessities for the household in the morning and says that yesterday’s events have pinned some awareness inside him.

On the other hand, Anupama plays some classic music and comes to greet Anuj in the bedroom while he takes a bath in the washroom.

After Anuj comes out, Anupama apologizes for her words after the function and tries to clear out her intentions.

With sweet music playing in the background, Anupama helps Anuj get ready for his office and brings a smile to his face.

© Copyright tellybest.com, 2022, 2023. All Rights Reserved. Unauthorized use and/or duplication of any material from tellybest.com without written permission is strictly prohibited.
Cached Saved on: Wednesday 25th of January 2023 10:37:08 AMCached Disp on: Wednesday 1st of February 2023 08:59:58 PM