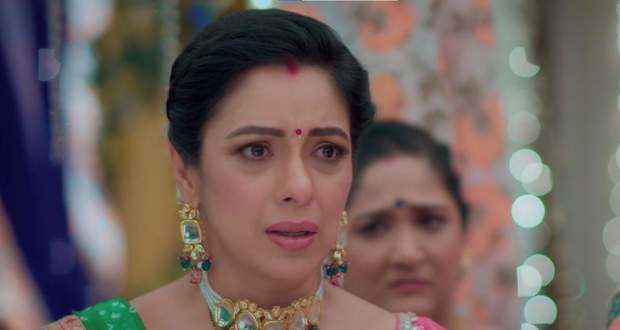 Vanraj tells Anupama to not teach him how to handle her daughter and Leela also interferes in their fight, but Anupama retaliates back.

While Pakhi is crying in her room, Samar and Toshu try to convince her that Adhik is not suitable for her.

In the Kapadia house, Barkha gets mad at Adhik and tells him to forget Pakhi, and Anuj tries to make him understand that he should focus on his career and priorities right now.

As Vanraj lashes out at Anupama for letting all this happen in front of her eyes, Kavya tries to calm him down and defend Adhik and Pakhi’s feelings for each other.

Anupama tells Vanraj that as much as they try to stop Pakhi, she will rebel against them.

While on a call with Pakhi, Adhik asks her to make a decision for herself and not let her family dictate her choices.

As their fight continues, Vanraj tells Anupama to separate the Kapadia family from the Shah family and remove any ties left between them.

While they are arguing, Anuj enters the house and tells Vanraj to handle things with maturity.

Vanraj asks Anupama to take Anuj and leave but she says she’ll leave when she wants to and will not listen to him anymore.

Barkha panics about Adhik and Pakhi getting more close in the future and Ankush tries to calm her down by saying that nothing has happened between them yet.

She tells Ankush that they should not wait to take a step till the situation is out of control and says Rakhi was right about the Shah house being a circus.

Barkha says she doesn’t want Pakhi to be a part of the Kapadia household and says that class difference is the reality of our world.

As she worries about the situation, she asks Ankush to go and talk to Adhik and tell him to find another girl for himself, who belongs to better family background.

Anupama comes to Pakhi’s room to check on her and they both hug each other, while Pakhi tries to convince Anupama that she hasn’t done anything wrong.

As Pakhi cries, Anupama tucks her into the bed and sings a lullaby to her to help her sleep.

© Copyright tellybest.com, 2022, 2023. All Rights Reserved. Unauthorized use and/or duplication of any material from tellybest.com without written permission is strictly prohibited.
Cached Saved on: Wednesday 25th of January 2023 01:09:35 PMCached Disp on: Thursday 9th of February 2023 07:53:41 AM