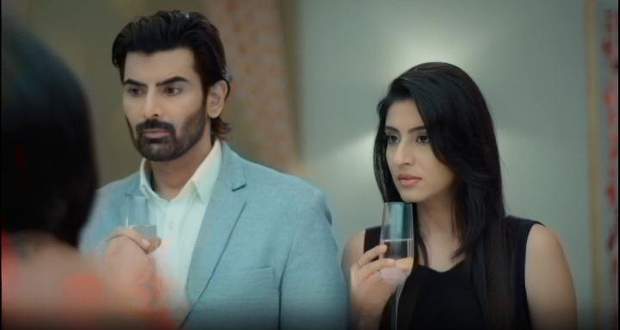 Today's Anupama 6th June 2022 episode starts with Anupama and Anuj feeling happy about having a complete family after the arrival of Barkha and Ankush.

Meanwhile, Pakhi warns that she has two brothers with her and he should be scared of them.

Adhik says that he has no brothers with him and Pakhi can easily check him out.

Meanwhile, Anupama tries out Barkha's new dish and GK arrives back from the pilgrimage.

Barkha and Ankush look at each other after Anuj and Anupama's numerous chats about their love and appreciation for one another.

Anuj talks about how Anupama is the owner of the new house they are about to shift in and Barkha should ask Anupama before deciding on the interiors.

Humble Anupama says that a house doesn't belong to an owner but is made of its family members and Barkha can do anything related to interiors anytime.

Later, Anuj feeds Anupama the salad made by Barkha while Barkha looks at the couple and seems like she lacks love from Ankush.

Meanwhile, Toshu misunderstands Adhik's conversation with Pakhi for something else and grabs him by his collar while Pakhi tries to explain that there's nothing like that and Adhik helped her instead.

On the other hand, Samar meets a girl with a hat and interacts with her about dancing.

Later, the girl with the hat arrives and calls out Adhik's name out of the crowd and walks away with him while Toshu, Pakhi, and Samar look at them leaving.

Meanwhile, Vanraj spends some time with Hasmukh and Leela and they play board games together.

Further, Vanraj shows his concern about how he realized the value of relationships after losing them to his ego.

Vanraj is scared of losing his kids and parents and shares his worries with Hasmukh.

Later, Anuj asks Ankush about his business in the US while Barkha says that he has winded up his business and will be staying in India forever.

Barkha mentions looking for a house while Anuj gets angry about how they could think of living separately.

Cunningly, Barkha looks at Ankush like their plan got successful like they knew this reaction of Anuj was about to come.

Further, Samar, Toshu, and Pakhi arrive back from the music festival and Vanraj scolds them out of worry and later asks them for lunch.

© Copyright tellybest.com, 2022, 2023. All Rights Reserved. Unauthorized use and/or duplication of any material from tellybest.com without written permission is strictly prohibited.
Cached Saved on: Wednesday 25th of January 2023 04:07:22 PMCached Disp on: Sunday 5th of February 2023 12:49:48 PM