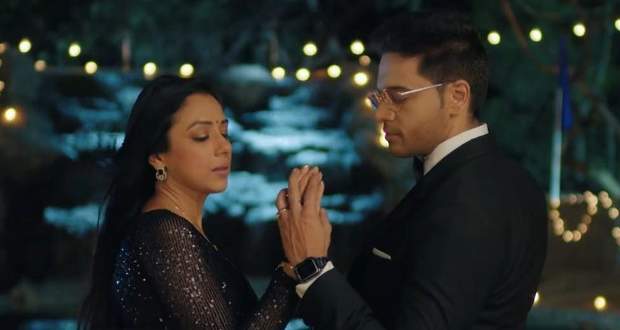 Today's Anupama 6th May 2022 episode starts with Vanraj hearing the discussion of his children and crying by himself while listening to the words of affection for Anuj from them.

Vanraj feels dejected on hearing them deciding to call Anuj "dad" or "papa".

Devika comes and gives Vanraj the advice to become a good-hearted person after spotting Vanraj crying.

Vanraj walks out of the house with an upset face while thinking of his children and Devika’s words.

Meanwhile, Anuj and Anupama have a conversation about their relationship that is going to change after marriage.

Anuj decides to always be a friend to Anupama so that the baggage of being a husband-wife does not pressurize them.

Anupama also asks Anuj to always be frank with her and not hide things as those things become walls later in the relationship.

Celebrating a new start in their equation, Anuj and Anupama cut the cake and feed each other with love.

Anupama rests her head on Anuj’s chest and feels at peace after he hugs her back.

On the other hand, Vanraj decides to do something about Anuj and refuses to let him take away his children.

Anuj drops Anupama at the house and bids farewell ending the day.

As Anupama goes to meet Hasmukh, Leela stops her by telling her that Hasmukh is already asleep.

The next day, Anupama gets greeted by the workers and receives gifts from them as a token of congratulations on her marriage.

Anupama goes to Hasmukh with breakfast and tells him that she will feed him by herself.