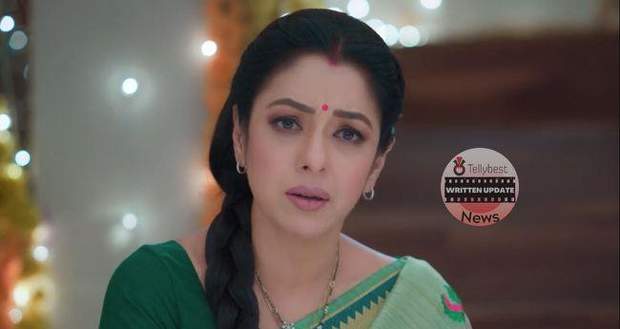 Today's Anupama 6th November 2022 episode starts with Anupama getting scared seeing a lizard kept there by Bhavesh (Anupama's brother), Kanta (Anupama's mother) is also with him.

Meanwhile at home Bhai-Dooj ceremony is being performed, Pakhi remembers that and is saddened as she misses her brothers.

Adhik reassures her saying that Pakhi will celebrate the next Bhai-Dooj with her brothers.

Meanwhile, at the Shah's, while Samar and Paritosh are missing Pakhi Kavya also chimes in saying that the occasion doesn't feel like a celebration without her.

Vanraj asks Samar and Paritosh to go to Pakhi's house to get the Tilak done.

Pakhi sees them at the Kapadia's and is excited beyond measure seeing them and they hug each other.

After seeing this Adhik pleads with Barkha to let go of her anger only for today but Barkha responds sharply with a no.

At the Shah residence, Leela and Hasmukh inform Vanraj and the others about the auspicious date being 4 days from today, which leaves Vanraj feeling confused.

Anupama then tells Pakhi and Adhik that the wedding will take place 4 days later from the Shah residence.

Pakhi is not happy hearing that, and Barkha taunts Pakhi asking if Pakhi is reconsidering her decision to marry Adhik.

Pakhi responds by saying that she doesn't want to get married at the Shah residence.

Samar, Paritosh, and Adhik also chime in saying that the Shah's agreeing to get them re-married is enough and they don't need a big venue.

However, Pakhi says, that she isn't demanding a destination wedding at Udaipur, Goa, or Venice. Pakhi says that if she gets married in Ahmedabad it can be done in a better place than the Shah residence.

Anupama is shocked to hear that and tells her to remember that even she was married off from the Shah residence itself.

Anuj substantiates this by saying that Pakhi and Adhik are educated and so they don't need to become somebody's responsibility.

Paritosh and Samar tell her that if Pakhi rejects the idea of getting married at the Shah residence, Vanraj will feel insulted.

Pakhi starts crying saying that she wants her wedding to be the talk of the town.

Anuj consoles her and tells Pakhi that her wish will be fulfilled, but Anupama doesn't agree and says no.