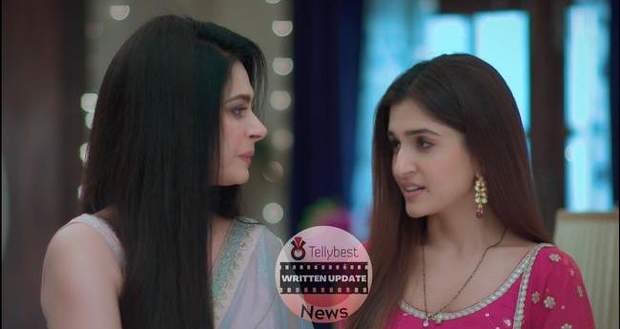 Today's Anupama 6th October 2022 episode starts with Leela getting facilitated by Anupama and asked to say a few words about how she is feeling.

Leela says that she is very happy to receive the award and talks about her and Anupama having a bittersweet relationship.

As Leela says that she has a fairly good relationship with Anupama, the ladies from the neighborhood begin to revolt and say that everyone knows what she and Vanraj did to Anupama.

Moving to her family hierarchy, another lady mentions how Toshu is also following Vanraj to cheat on Kinjal.

The Shah family begins to speak on Leela’s behalf and a huge argument takes its form.

Anupama stops both sides and asks the crowd to raise their hands if there is no fight in their family.

Seeing no hands being raised, Anupama tells everyone that every family has its own problems and asks both sides to let go of the grudges and celebrate the festival together.

Anupama presents a dance with fire in her hands and pots placed on her head surprising many in the crowd.

As the music finishes, Anuj goes up on the stage and takes over the music department by announcing himself as the DJ.

Everyone in the crowd begins to enjoy themselves as the music plays loudly with Anuj’s request to everyone to dance.

Pakhi dances with Adhik and seems to be happy to be with him after a long time.

Suddenly, Adhik takes Pakhi to a corner and asks her for a kiss which surprises Pakhi a bit.

Adhik tells Pakhi he cannot control himself anymore as she looks absolutely gorgeous.

Vanraj notices that Pakhi is absent and goes to search for her but finds both Pakhi and Adhik dancing in the crowd.

Suddenly, Paritosh appears in the crowd and begins to play dandiya with Kinjal shocking everyone.

Anupama takes over Kinjal and aggressively plays dandiya with Paritosh until his dandiya sticks fall from his hand.

Taking Toshu aside from the crowd, Anupama tells him that she is his mother in both anger and stubbornness.

Vanraj asks Toshu to come with him and asks him why he appeared at the event when he was asked not to show up.

As Toshu plays the victim by saying that he is left alone by the entire family, Vanraj reminds him that he is responsible for his own situation.

Toshu grits his teeth in anger and tells himself that he knows what he has to do further to have his daughter.

The function continues with the families enjoying the Garba night.

Anupama comes to Rakhi and tells her to enjoy Garba while she will look after Pari in the meantime.

However, as Anupama turns back in the direction of the cradle, she spots it empty without Pari in it.

Anupama and Rakhi begin to search for Pari while Anupama finds a note in the cradle and gets shocked after reading it.

© Copyright tellybest.com, 2022, 2023. All Rights Reserved. Unauthorized use and/or duplication of any material from tellybest.com without written permission is strictly prohibited.
Cached Saved on: Monday 21st of November 2022 06:24:26 AMCached Disp on: Friday 9th of December 2022 04:33:17 AM