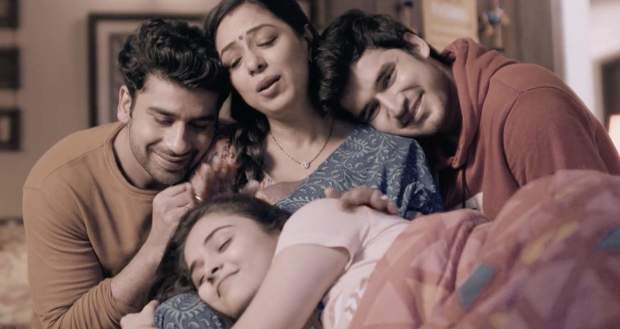 Today's Anupama 7 April 2021 episode starts with Pakhi looking at her parent's picture while Kinjal comes there and asks her if she's upset because Anupama is not there.

Pakhi recalls her moments with Anupama and feels guilty about taking Anupama for granted throughout her life.

Meanwhile, Anirudh asks Kavya if she is sure about marrying Vanraj as she does not have faith in Vanraj while telling her to have faith in him as she loves him.

Pakhi says that she hopes the divorce doesn't happen while Kinjal stops her asking her to support Anupama in her decision.

Anirudh tells Kavya that he will always be with her while she appreciates him.

Later, the electricity goes off while Rakhi says that she can't sleep without AC.

However, Leela manages to convince her to sleep in her room.

Everyone goes to sleep while someone enters the Shah house through the kitchen window.

Rakhi goes to the kitchen to get water and gets scared seeing Mamaji there.

Leela wakes up and argues with Rakhi while drinking all of the water from the bottle.

The lady drops something and Mamaji comes and talks to her thinking that she is Rakhi.

The lady goes towards the front door but goes back inside the house to not make Mamaji suspicious.

Meanwhile, Kinjal sings a lullaby for Pakhi while she remembers Anupama singing for her and putting her to sleep.

© Copyright tellybest.com, 2020, 2021. All Rights Reserved. Unauthorized use and/or duplication of any material from tellybest.com without written permission is strictly prohibited.
Cached Saved on: Tuesday 2nd of August 2022 09:35:13 AMCached Disp on: Wednesday 17th of August 2022 03:21:17 PM