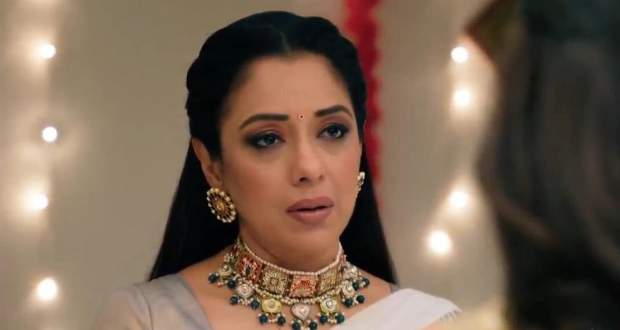 Today's Anupama 7 December 2021 episode starts with Anupama talking to Vanraj about the divorce on which he comments that he has decided to end his and Kavya’s marriage.
Anupama explains that their divorce will affect the whole family in a negative way including their kids too.
Meanwhile, Kavya throws things in anger in the room. Vanraj catches an object thrown towards him and Anupama as they enter the room.
Kavya cries and acts violently while Anupama hugs Kavya to console her.
Seeing Kavya in that state makes Anupama remember her past self.
At the same time, Vanraj requests Kavya to stop her drama but Anupama lashes out at Vanraj for saying so.
Anupama tries to convince both Vanraj and Kavya that they should talk to each other peacefully and give their relationship a second chance. Even after that if they want to separate, they can do so.
However, Kavya again repeats that she will never give a divorce to Vanraj while Vanraj contradicts her that she will have to.
Kavya suddenly bangs her hand on the wall and threatens that she will tell the police that the wound was given to her by Vanraj.
When Kavya threatens to charge domestic violence case against Vanraj, Anupama tells her that she is doing very wrong as Vanraj has never mistreated her till now.
Kavya tells Anupama that she would avenge her and not change her decision.
Surprisingly, Vanraj himself dials the police and tells Kavya to file a case against him. He says even if he goes to jail, at least he would be able to get a divorce from her.
Anupama stops him and Vanraj leaves. She says to Kavya that she did what she could do.
Later, Anupama meets Anuj outside the house and explains her concern regarding the situation between Vanraj and Kavya.

© Copyright tellybest.com, 2020, 2021. All Rights Reserved. Unauthorized use and/or duplication of any material from tellybest.com without written permission is strictly prohibited.
Cached Saved on: Wednesday 19th of January 2022 02:15:02 PM