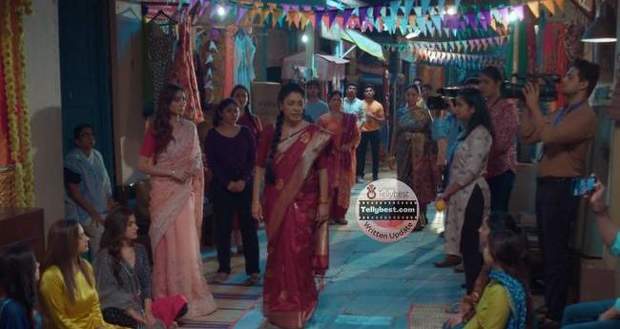 Today's Anupama 7th December 2022 episode starts with Leela, Hasmukh, and Pakhi answering several calls from the neighbors and relatives after the news of Anupama’s protest spread.

Vanraj wonders how he is supposed to stop the madness of the family members that are going on in that locality of Vijayendra Mehta.

Meanwhile, Vijayendra asks Mananth (the molester) why he caused so much trouble when his sister is about to get married.

Mananth says that everything is happening because of those women outside and he just merely made a mistake.

Mananth’s mother tells him that he should not have committed such a venomous crime against a girl to which Vijendra says that his son just committed a trivial mistake.

Mananth’s sister asks him to surrender himself at the police station but Mananth screams at her and asks her to keep her mouth shut.

Vijendra says that he does not need advice from women and asks them to go away at once.

Anupama and the other women sit peacefully to protest against the crime committed by Mananth when a firecracker starts to go off there.

Anupama and others quickly move back while Anuj provides them shawls to cover themselves from the sparks.

Vijendra and Mananth laugh with satisfaction on seeing all the protesters jumping around in fear, and comment on how women get frightened by the bare minimum.

Anupama announces that they will not move an inch from there till the next morning and starts to make sounds with instruments.

Meanwhile, Vanraj and Leela are unable to sleep due to worry about the family members and call their protest foolishness.

Vijendra and Mananth decide to take an extreme step so that they can clear all protestors at once.

Anupama and Dimple go to the washroom in a resident’s house in that locality while Vijendra and Mananth follow them.

Vijendra and Mananth bring two women with them at their go-down after kidnapping them in the dark.

Thinking that they are Anupama and Dimple, Vijendra grabs the neck of one while Mananth takes care of Dimple.

Mananth threatens Dimple by saying that she is asking for it by going against him and his father.

Just then, Anupama and Dimple appear at the go-down and point out how bizarre Mananth and Vijendra are.

As Anupama and Dimple flash the lights at the two persons tied up, they turn out to be the mother and sister of Mananth.

Seeing that they touched their own family with dirty intentions, Vijendra and Mananth get shocked and put their heads down in shame.

Anupama calls Anuj and asks them to come to the go-down after turning the light on.

Anuj and others come and get shocked to see the women of that family tied up together.

After releasing them, Anupama tells Vijendra and Mananth how God shows karma to the ones who deserve it.

When the talk is pointed to their wives and sisters, then they are ashamed of themselves otherwise, they do not hesitate to commit such crimes.

Anupama reminds Vijendra that the Gods he worships are also women and that god resides anywhere where women are given respect.

The police assure Anupama that they will receive a harsh punishment but Anuj says that they have already gone down in their own vision.

Vijendra’s wife curses both him and his son with the wish for death and vows to never put on sindoor for him.

With the father-son arrested, Anupama and the others come out of the go-down with proud heads held high.

© Copyright tellybest.com, 2022, 2023. All Rights Reserved. Unauthorized use and/or duplication of any material from tellybest.com without written permission is strictly prohibited.
Cached Saved on: Thursday 26th of January 2023 07:08:48 AMCached Disp on: Tuesday 7th of February 2023 12:43:31 AM