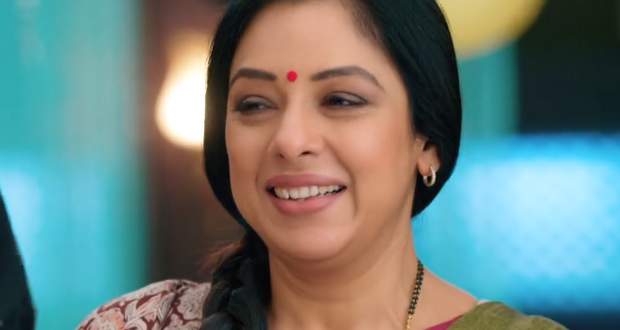 Today's Anupama 7 January 2021 episode starts with Vanraj apologizing about Kavya’s behavior. Anupama apologizes to him as well for causing his accident in some way.

She asks him to stay as a son and father but refuses to accept him as a husband. Later, Anupama bumps into Samar and shares her feelings.

She knows she will be asked by everyone to forgive Vanraj but she is adamant to stick to her decision.

Samar calls her the most modern mother of their time. Samar is asked by Anupama to feed his father food.

Samar helps Vanraj in eating food and also types a leave application for him. Vanraj further asks Samar to get his laptop from Kavya’s place.

Kavya imagines Samar threatening to send court orders but Samar is there only to get the laptop. Kavya sends a note but Vanraj doesn’t respond to her.

Pakhi takes Anupama downstairs for a new year celebration. Vanraj has planned to bring in the new year with new hopes.

He shares that he has suffered a lot throughout the year and the family has also suffered a little. He wishes to do a party and also sings songs.

Further, Samar and other family members dance to a popular song to welcome the new year. Samar also makes Anupama dance along with him.

Vanraj feeds everyones cake and stops in front of Anupama. Anupama doesn’t eat cake from his hand but eats it from Samar’s hand.

Meenu asks everyone to write their wishes on a piece of paper. Vanraj wishes for his family while Anupama wishes to maintain a balance between work and home.

© Copyright tellybest.com, 2020, 2021. All Rights Reserved. Unauthorized use and/or duplication of any material from tellybest.com without written permission is strictly prohibited.
Cached Saved on: Friday 30th of July 2021 01:45:03 PM