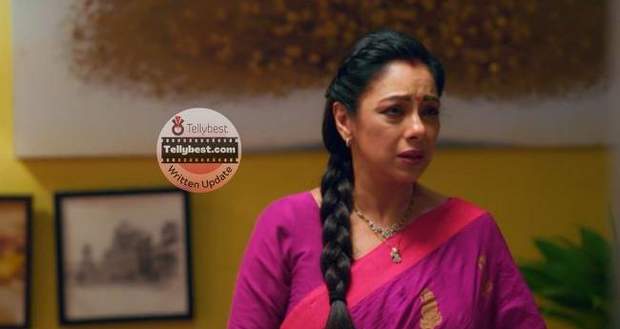 Today's Anupama 7th January 2023 episode starts with Anuj getting ready while Anupama lovingly stares at him and wishes that no evil sight falls on her husband.

Anuj gives Anupama a sweet smile as she tells him that she will change herself and learn to say no in this new year as she ruined things between them.

As Anupama asks for a chance from Anuj, he says that their relationship is that of two equal individuals so he is no one to give her a chance but he can only request certain things.

Anuj helps Anupama dry her hair with the dryer and feels comfortable seeing Anupama trying to mend the crack in their relationship.

Meanwhile, Toshu reveals an office setup on the lawn of the Shah house and surprises everyone by announcing his new office venture.

Kinjal asks Toshu what he plans to do with that small office setup to which Toshu replies that he is starting his business as a property dealer.

Toshu says he wants to build a big business and is leaving the job because he was doing it to become closer to Kinjal.

Vanraj suggests to Toshu that to build a business, one has to know the area in detail but Toshu assures him that he will study on the internet.

Leela attempts to beat Toshu with a stick to vent her frustration but everyone stops her from bursting out.

She says it was better for Toshu to work under Kinjal as he had a job to keep then.

As Vanraj comes to Kavya to tell her about Toshu, he gets another surprise at seeing Kavya wearing a sexy short dress.

Kavya dances to a song with her sexy moves while Vanraj stands there with wide eyes and a confused face.

Kavya tells Vanraj that she is starting her modeling career, to which Vanraj asks her how she could take such a big decision by herself.

Saying that Vanraj also rejected the job by himself, Kavya asks him not to intervene as she has made a new year’s resolution to move forward with her passion.

Kavya says that one agency has already liked her photos and she has decided to do whatever she wants after what happened yesterday.

At the same time, Adhik returns to his and Pakhi’s home and gets surprised to see the house neat and clean.

Pakhi hands over Adhik his protein drink and asks him to take his shower quickly as she has already prepared his clothes.

Adhik gets impressed with Pakhi’s changed behavior while Pakhi promises that she will continue her studies simultaneously.

Adhik picks up Pakhi in his arms and says that they should spend some time in the bedroom before they go on a date at night.

On the other hand, Ankush packs his things for a business trip while Barkha warns him that the events of yesterday should not be repeated.

Barkha tells Ankush that he was demanding a divorce in his drunk state but she will never agree to that.

As Ankush gets ready to leave, Barkha tells him that she expects only his financial support for her daughter and brother.

After Ankush and Barkha both leave for their work, Anupama bids goodbye to Anuj after he tells her that he has work in the office and cannot skip.

Later, Anupama talks to Devika on a video call and asks for suggestions on how she can make Anuj happy.

© Copyright tellybest.com, 2022, 2023. All Rights Reserved. Unauthorized use and/or duplication of any material from tellybest.com without written permission is strictly prohibited.
Cached Saved on: Wednesday 25th of January 2023 01:22:59 PMCached Disp on: Thursday 9th of February 2023 04:29:48 AM