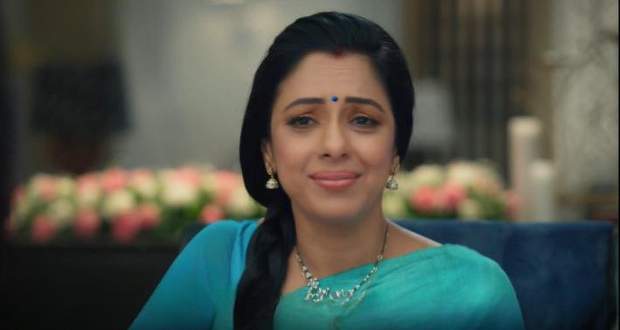 Today's Anupama 7th June 2022 episode starts with Anuj and Anupama getting happy about having a family after marriage.

Anuj discusses how Ankush used to have sibling rivalry with him in the early years but became best friends after some time.

Later, Ankush talks to Barkha and discusses his childhood days with Anuj and is extremely happy to arrive back home.

Anuj discusses with Anupama how after some time Ankush left for the US and got separated after the death of his father.

Anupama says that family is a blessing while Barkha talks to Ankush and says when he will talk to Anuj.

Ankush seems to be comfortable and enjoy his time in India by saying that he will talk to Anuj after some time and not now.

Further, Leela reminds Anupama about the Pag Phera ritual and feels happy about their married life.

Anupama and Anuj discuss waiting to reveal his brother Ankush's arrival at his house.

On the other hand, Barkha pesters Ankush to talk to Anuj or she will do it.

Further, Barkha seems to be irritated about Ankush lying about winding up his business and not telling the truth about his finished business due to heavy losses.

Later, Ankush says that he will talk to Anuj at his place while Barkha seems restless.

Meanwhile, Pakhi thinks about Adhik and looks at his profile on her cellphone.

On the other hand, Ankush seems to trust his brother's big heart while Barkha provokes him to ask for a partnership rather than a job.

Barkha seems to distrust her relationships as her own brother kicked her after the death of her parents.

As Barkha is requesting Ankush to ask for his rights Anuj and Anupama arrive at their door and both seem to be shocked.

Meanwhile, Vanraj and Pakhi spend some father-daughter time together while Pakhi shows Vanraj her concert picture.

Anuj and Anupama realize about going to Barkha and Ankush's room unannounced and also notice some worry on Bhaiya and Bhabhi's faces.

Later, Anuj promises Anupama that no matter how many responsibilities they face, they will never let them burden their relationship.