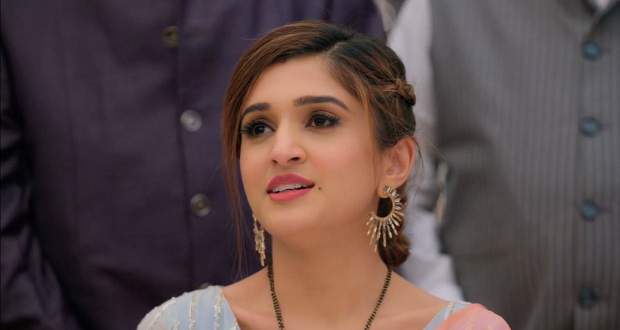 On hearing the news of Kinjal’s pregnancy, Pakhi excitedly congratulates Paritosh who, in the temper of the situation, commands her to shut up.

Kinjal asks Paritosh not to create scenes in front of the family but he announces that he does not want children at the current time.

Hearing this, Anupama asks Paritosh to calm down and think again as being a father may sound scary but is actually, very beautiful.

Paritosh does not listen to anyone and straightaway announces that he is not ready to handle such a huge emotional responsibility yet.

He explains children as shackles of moving forward in his career which shocks Anupama and Vanraj.

Trying to calm the situation, Anupama tells both Kinjal and Paritosh not to fight with each other and thoroughly think about the decisions.

Meanwhile, Anuj prepares halwa for Anupama but gets concerned after seeing her quite in distress.

While feeding her, Anuj asks Anupama about the matter, to which, Anupama replies that her family will need her more than she needs herself.

The next day arrives, Anupama converses with Kinjal on the phone while Leela, Hasmukh, Samar, and Vanraj help her to lighten up her mood.

Anuj comes into Anupama’s house asking for curd as he has an important meeting regarding his new work.

With hopes in her eyes, Anupama asks Anuj to promise her that he will, once again, gain his old position back.

She expresses her wish to always see Anuj as the king on his throne.

Anuj promises that he will work his best to achieve that in no time.