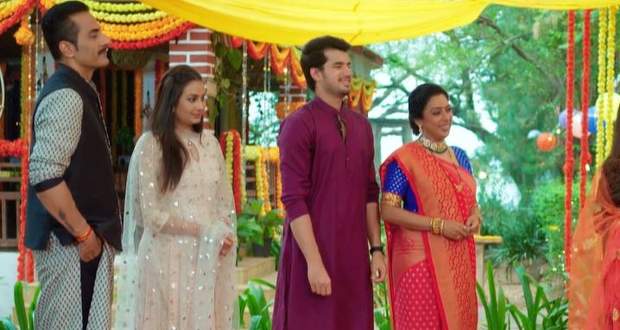 Anupama invites Kavya for the pooja as a part of the ritual and she accepts the invitation while forming a plan.

The next morning, Anupama is preparing for the engagement rituals while Leela tells her to relax and asks her why she is tensed.

Anupama looks at Vanraj and says that she is just fine.

The rituals are about to begin and Hasmukh tells them the scientific reasons behind the pre-marriage rituals.

Anupama gets surprised seeing Kinjal and dolly arrive and gets ecstatic.

Kinjal gets emotional but Anupama tells her to be happy and the pooja rituals begin.

Anupama and Vanraj do a ritual together while Kavya looks on from her cottage.

The pooja gets complete when Kavya comes there and announces that the engagement can't happen to anger everyone.

Anupama tells her to be more clear and Kavya casts out the black eye from Anupama, Vanraj, and herself confusing everyone.

She further says that she hopes Vanraj and Anupama's divorce happens without any hurdle.

Upcoming Anupama written episode update: Vanraj argues with Kavya and breaks their relationship with her.