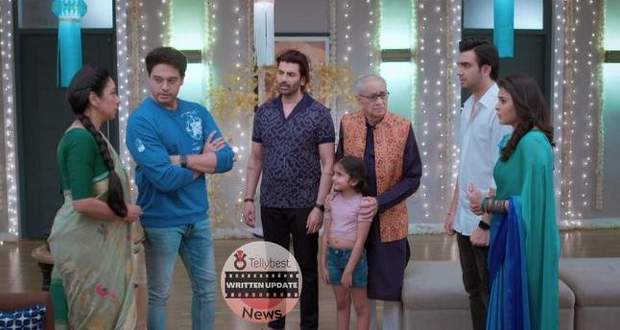 Today's Anupama 7th November 2022 episode starts with Anupama telling Pakhi that not all of her desires deserve to get fulfilled.

Anupama tells her to be thankful for getting remarried and not create a ruckus any further. Anupama further asks what right she has to ask for these insane demands.

Barkha chimes in saying that she agrees with Anupama that Pakhi and Adhik deserve to get married in the Shah house, she also says that Adhik doesn't even deserve that.

Pakhi asks Barkha to keep quiet, to which Anupama says that she bore Pakhi's tantrums because she is her mother but Barkha won't as she is Pakhi's mother-in-law.

Adhik convinces Pakhi by saying that the destination of their wedding is not important, and tells her that the blessings of their elders is the most important thing,

Adhik tells Pakhi they will have a grand reception, so she shouldn't fret.

Pakhi is finally convinced and she agrees to get married at the Shah residence.

Meanwhile, Barkha vows to not let this wedding take place.

The next day, Anupama is late to go to the college when Ankush brings out Adhik ad announces that Adhik will join Anuj in the office from today onwards.

At the Shah house, Leela calls Anupama to invite her to the Shah house for the wedding prep, but Anupama sends her a voice message saying she won't be able to do so as she can't miss college.

Leela also says that the neighbors are taunting her saying that each member of her family is a run-away wedding, but when Pakhi gets marries at the Shah house everybody will become mum.

Vanraj says that it's no fault of the people, when Kavya chimes in saying that now that the wedding is taking place, sangeet, and mehendi should also take place.

Vanraj disagrees and says he cannot participate in the wedding festivities.

In the meantime, Barkha calls someone to dig up Adhik's past when Ankush comes over there and she abruptly stops speaking.

Ankush tells her to not create chaos but Barkha says that Ankush doesn't understand her insecurities which Ankush has labelled as greed.

On the other hand, at college Anupama receives a star from her professor for her detailed project.

The professor then starts teaching about Profit and Loss and gives an example that housewives are the best savers and negotiators.

After the class finishes, Anupama thanks her professor for teaching so well and invites her and the entire class to Pskhi's wedding.

Meanwhile, Barkha brings her friends to the Kapadia house, where they spot Pakhi and ask Barkha who she is.

© Copyright tellybest.com, 2022, 2023. All Rights Reserved. Unauthorized use and/or duplication of any material from tellybest.com without written permission is strictly prohibited.
Cached Saved on: Monday 21st of November 2022 02:05:21 AMCached Disp on: Thursday 1st of December 2022 01:14:22 AM