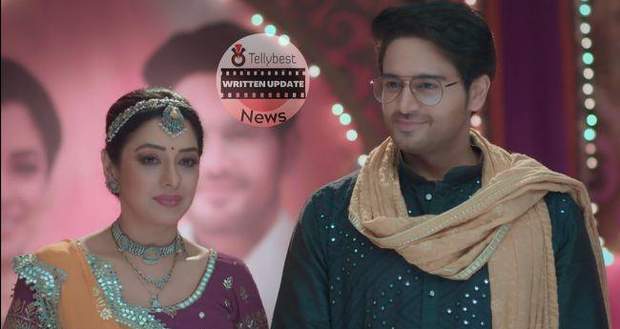 Today's Anupama 7th October 2022 episode starts with Rakhi rushing to inform other family members while Anupama comes out of the function and searches for Paritosh.

Anupama looks at the note where Paritosh has written that he is going away with Pari forever as no one is letting him go near his daughter.

Vanraj, Samar, and Dolly come out with Rakhi and ask Anupama who the person is that took Pari with them to which Anupama shows them the note and says it is none other than Paritosh.

Without wasting any more time, Anupama tells them to search for Paritosh and gets into the car to look for him by herself.

On her way, Anupama calls Anuj and informs him about Paritosh’s deed while asking him to go home with Anu.

Anuj tries to come to Anupama but Anupama denies him doing so as his body needs rest after all the dancing and stress it was put through.

After Anupama requests him to rest at home, Anuj agrees to it and asks Anupama to call him if she needs anything in an emergency.

Meanwhile, Toshu admires Pari while sitting in a temple and tells her that she is safe with her father as he loves her more than anything.

Anupama passes by the same temple and decides to stop there briefly to pray to God for help.

While Anupama asks God to help her to find Pari, she spots Pari’s toy in the temple and thanks god for the clue.

Elsewhere, Rakhi panics thinking about how she will tell Kinjal about Pari being taken away by Toshu and gets stressed about Kinjal’s reaction.

Kavya and Dolly try to calm down Rakhi but get silent as they see Kinjal coming their way along with Leela and Hasmukh.

Kinjal asks Rakhi about Pari to which Rakhi replies that she is with Neela (a neighbour) to prevent Kinjal from losing her mind.

However, Neela comes there and bids goodbye to the Shahs and informs them that Pari is not with her.

Coming back, Anupama gets a call from Kinjal crying in panic as she asks Anupama to bring back Pari as soon as possible.

Anupama asks Kinjal to be strong as a mother can never get weak for the sake of their children.

Vanraj and Samar also head to the temple after Anupama sends them the location while Vanraj feels ashamed for Toshu’s actions.

Anupama spots Toshu feeding Pari while sitting on a bench but decides to approach them steadily as Toshu might panic at seeing Anupama.

Meanwhile, Leela defends Toshu by saying that he did all this because he is angry over the fact that he is not allowed to come near Pari.

Rakhi and Hasmukh ask Leela to stop defending Toshu as Rakhi intends to send him to jail for kidnapping Pari.

Back at the temple, Anupama quietly approaches Paritosh as he looks for diapers for Pari but gets shocked when Vanraj calls her name from a distance.

Paritosh turns back and looks at Anupama with a face filled with horror.

© Copyright tellybest.com, 2022, 2023. All Rights Reserved. Unauthorized use and/or duplication of any material from tellybest.com without written permission is strictly prohibited.
Cached Saved on: Monday 21st of November 2022 02:52:45 PMCached Disp on: Sunday 4th of December 2022 11:56:52 PM